Democratic candidate in last-minute campaigning to shore up traditional support 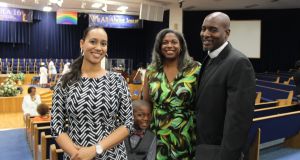 Amanda Pierre-Louis with her friends, wife and husband Deanna and Aroson Randle, at the Upper Room Church of God in Christ in Raleigh, North Carolina. The three see African-Americans as being worse off now than they were when Barack Obama was elected. Photograph: Simon Carswell 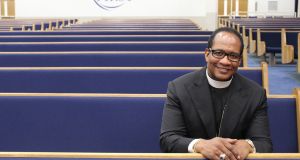 “It seems like the eyes of the world are on North Carolina, ” Bishop Patrick L Wooden Sr tells his congregation in the Upper Room Church of God in Christ, an African-American church in Raleigh.

The minister, known for his vehement and often controversial anti-LGBT views, explains that there are journalists from Ireland and Canada in the house.

Their interest, he says, is in the presidential race in the Tar Heel State, a must-win for Donald Trump if the Republican has any chance of winning the White House.

North Carolina’s results will land soon after polling ends at 7.30pm on Tuesday (12.30am Wednesday, Irish time) and will be among the first figures to come in. They should provide an early sign of whether Trump has won or lost.

In a church with TV cameras transmitting the Sunday service, Wooden, a staunchly social conservative cleric, says one reporter asked him what would be the worse thing to happen in Tuesday’s election.

“If the people fail to vote” was his answer. “You vote your conviction, you vote your conscience,” he tells the members of his church after his blistering opening hymn that he performed himself accompanied by a full energetic band. “You vote those policies who are closest to what you believe.”

Wooden tells the story of Daniel in the Lion’s Den in his sermon. He draws an analogy between King Darius being tricked by rivals into condemning Daniel to death and how Barack Obama convinced black voters to support him because they shared the same colour only to later force them to go against their religious beliefs after he flipped his support in favour of same-sex marriage.

The bishop’s pulsating performance mixes song and spoken word and brings his congregation to their feet frequently as an organist punctuates the lively sermon with screeching chords.

Afterwards, in the calm of his office, Wooden tells The Irish Times why he thinks African-Americans have been shortchanged by Obama, why they are not supporting Democrat Hillary Clinton this time around in anything like the numbers and why he is voting for Trump.

“We have a serious case of buyers’ remorse. The facts bear out that we are not better eight years later,” he says, referring to housing, arrests, employment and education. The LGBT community and Hispanic Americans have been treated better by Obama than African-Americans, he claims.

“We have seen a man who, by and large, has turned his back on his most faithful constituency,” he says.

Early voting in North Carolina that ended on Saturday showed that black voters are turned off in this election; their numbers are down 8 per cent on 2012. Troubled that African-American voters who turned out in record numbers for him are not as keen on Hillary Clinton, Barack Obama last week campaigned three times on two separate days in the state that narrowly voted for him in 2008 and rejected him four years later.

“I need you to go out and just nag the heck out of folks who aren’t voting,” Obama said at a Clinton rally at Fayetteville State University, a historically black college in North Carolina on Friday. “I need you to tell them that Barack is personally asking them.”

Wooden says Clinton is not as popular among black North Carolinians because they remember how Obama accused the Clintons of “playing the race card” in their bitter 2008 Democratic primary and how she once implied that black youths were “super-predators” – a phrase she later apologised for.

“The huge turnout that Barack Obama received from the African-American was for the most part based on race. Hillary’s not black so many have retreated back to their old habits of not participating,” Wooden says.

The bishop describes Clinton’s use of black musicians Beyonce and Jay Z as “condescending” and “embarrassing”.

Last-minute rescheduling sent the Democratic nominee back to North Carolina for a midnight “get out the vote” rally on Monday, not far from Wooden’s church, just six and a half hours before polls open.

She even took in Michigan, another state with a large black population, on her four-state final day of campaigning. The midwestern state has voted Democrat since 1988. Clinton held a commanding lead in the polls but her lead has slipped since the FBI put a thumb on the scale, encouraging Trump to target the state.

The Real Clear Average of polls shows Trump with a razor-thin lead over Clinton in North Carolina where the Republican has included a Monday stop, also in Raleigh, nine hours before his opponent’s event.

Wooden says Trump’s “what do you have to lose?” exhortation to African-American voters is “a hard argument for Clinton to overcome”.

“The African-American community has been loyal to the Democratic Party for the last 50 years. The simple thing to ask is what have we gotten for that loyalty?” says the bishop.

“She should be concerned because she is counting on this particular voting bloc to shore up the votes that she needs to win this election. They are afraid because Hillary Rodham Clinton doesn’t have it.”

He concedes that his home state is a “coin-toss.”

The massive early-voting surge in unaffiliated voters, with ties to neither party, is the great unknown in North Carolina and so neither candidate can bank on it.

This critical swing state has been an important stop on the electoral map. Before Monday Clinton had visited the state 10 times since June, Trump 12 times.

Out in Wooden’s congregation after his service, Aroson Randle (40) and his wife Deanna (40), who run a childcare business, are proud Trump supporters.

“I voted for Donald Trump,” says Aroson, standing between the two banks of pews. “I ain’t shy about it.”

Deanna voted for Obama in 2008 but not in 2012 because of his support for same-sex marriage. Most African-Americans, she said, only voted for him because he would be the first black president.

“My grandfather was in his 90s. We asked him who he voted for. He didn’t even know his name. He said, ‘I voted for the coloured guy’,” she said.

Their friend Amanda Pierre-Louis (31), who owns an insurance agency, says she hopes black voters researched the issues behind the candidates in this election and “opened their eyes to see Democrats don’t fight for us because they know we are only going to vote one way”.

Aroson is particularly annoyed that Obama’s promised loan support for black-run small businesses failed to materialise. “He was talking over our heads, misleading to feel like he was going to help small businesses when in actuality there was no help offered.”

He even suggests that education standards may have been better for blacks during segregation, based on what older people who lived under it had told them.

The three see African-Americans as being worse off now than they were when Obama was elected. They also agree with Trump: they believe they have nothing to lose by voting for him.

“It can’t get any worse,” says Pierre-Louis. “It can be better faster than it can be worse.”