Nigel Farage says he will speak at Donald Trump rally 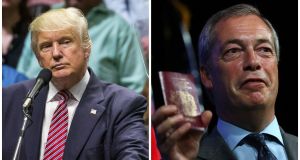 Nigel Farage (right), former leader of the UK Independence Party, has said that he will speak at a rally for US Republican presidential candidate Donald Trump in Mississippi on Wednesday night. Photographs: AFP/Getty Images.

Nigel Farage, former leader of the UK Independence Party, may be about to challenge Donald Trump’s claim to being “Mr Brexit.”

The British politician and pro-Brexit campaigner has said he will speak at a Donald Trump rally in Mississippi on Wednesday night.

The Republican presidential nominee is expected to address several thousand supporters in the Mississippi Coliseum in Jackson and Mr Farage has said he will also be speaking at the rally.

It is believed to be the first time that a British politician has addressed a Republican presidential election rally, certainly in modern times.

Mr Trump has described Brexit as a “great victory” and drawn parallels between the vote and his own populist campaign, becoming the first person never to have held public office to win a major party’s presidential nomination since Dwight D Eisenhower.

“They will soon be calling me MR BREXIT!” he tweeted last week.

Mr Farage’s announcement that he would appear at the rally caught some within Mr Trump’s campaign off-guard.

His campaign spokeswoman Hope Hicks has said she would “highly doubt” such a joint appearance, adding that the two men “don’t know each other.”

Mr Farage, who travelled to the Republican national convention in Cleveland last month, has said that he would not be endorsing Mr Trump at the rally because it would be wrong for a foreign person to intervene in a US election.

The British politician plans to share lessons learned from his successful campaign for the June 23rd vote for the UK to leave the European Union during his appearance.

“The Republican activists and managers here are keen to hear the Brexit story, hear how we managed to get 2.5 million people who don’t normally vote at all to go down to the polling station,” the UKIP MEP told The Daily Telegraph.

“It was a victory for the little people and if the Trump camp reaches out to those same people who have been disadvantaged by corporatism, under-cutting wages, a lot of strong similarities to the United Kingdom, then it does not matter what the polls say, what the liberal media say. In the end, elections are won by numbers.”

Mr Trump praised the Brexit vote a day after the referendum when he visited one of his golf courses in Scotland and raised the possibility of a similar anti-establishment vote in the US presidential election.

“I think you are going to have this more and more. I really believe that. And it is happening in the United States, ” he said.