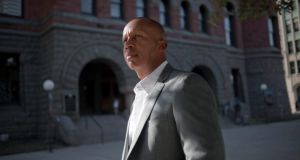 Bryan Stevenson, who founded and runs the Equal Justice Initiative, outside the former courthouse where the 1910 lynching of Allen Brooks, a black man, began in Dallas. Photograph: Brandon Thibodeaux/New York Times

In February 1919, Pte William Little, an African-American veteran of the first World War, returned to his hometown of Blakely, Georgia, in the American South. He was met at the train station by an angry white mob who ordered him to remove his army uniform and walk home in his underwear.

He refused but was saved by other white men who intervened to help. For weeks, Little was threatened. Anonymous notes were passed through his door, saying he had to leave town if he wished to “sport around in khaki”. But he didn’t have any other clothes to wear.

On April 3rd, his body was found on the outskirts of the town. He had been beaten to death. He was said to be still wearing his uniform.

“People were concerned that he might think more of himself than he should and they demanded he take his uniform and he didn’t, and he was lynched,” said Bryan Stevenson, executive director of Equal Justice Initiative.

“The idea that you could be lynched in your homeland because you served in the military and fought for their freedom – this is a particularly compelling example of how tragic and traumatising this era was for people of colour.”

Lynching in America: Confronting the Legacy of Racial Terror

Equal Justice Initiative is a nonprofit legal rights group based in Montgomery, Alabama, that primarily provides representation to poor people who are facing the death penalty or were wrongly convicted.

After five years of research based on newspapers, historical archives and interviews with survivors – along with 160 visits to sites in the South – the group has created an updated history of lynchings across the South. The work builds on the 1995 book A Festival of Violence by sociologists Stewart Tolnay and EM Beck and academic research by Tuskegee University in Alabama.

Stevenson, who is also a law professor at New York University, argues that the mob killings were a form of racial terror to subjugate black people and create a racial hierarchy in the South.

“Lynching was an extreme, dramatic and powerful storm of terror and terrorism,” he told The Irish Times. “The reason why we think that is an important narrative to develop is that the presumption of guilt that was behind these acts of violence, I think, continues to shadow many of our race relation today.”

According to the report, lynchings resulted from “a wildly distorted fear of interracial sex” and were often carried out, as a public spectacle, in response to casual social transgressions or allegations of serious violent crime.

The report offers several cases by way of example. In 1916 Jeff Brown was lynched by white men in Cedarbluff, Mississippi, for accidentally bumping into a white girl as he ran for a train. Jesse Thornton was lynched in Luverne, Alabama, in 1940 because he didn’t address a while policeman as “mister”.

“Members of the mob used a large corkscrew to bore holes into the victims’ bodies and pull out large chunks of ‘quivering flesh’, after which both victims were thrown onto a raging fire and burned,” the report says.

“The white men, women and children present watched the horrific murders while enjoying devilled eggs, lemonade and whiskey in a picnic-like atmosphere.”

Stevenson said they discovered a phenomenon known as “near-lynchings” where the fear that an encounter with a white person might provoke a mob to carry out a “terror lynching” led millions of blacks to flee the South, not to seek work in the north but as refugees.

“That kind of terror creates the kind of instability and insecurity that makes life really difficult to sustain and that’s what terrorism does – it unnerves, destabilises and disrupts all aspects of life,” he said.

As a historical counterweight to the monuments across the South that lionise the Confederate defenders of slavery, the Equal Justice Institute wants to place markers at the sites of lynchings, a campaign it hopes local communities will take up. By owning up to these dark acts from the shadows of the past, it may be possible to achieve racial equality and justice in American society, says Stevenson.

“You can’t get to reconciliation without truth and we haven’t really done a very good job of being truthful about the legacy of racial inequality and its mark on this country,” he said.