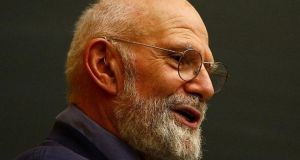 Oliver Sacks, the neurologist and acclaimed author who explored some of the brain’s strangest pathways in best-selling case histories like “The Man Who Mistook His Wife for a Hat,” using his patients’ disorders as starting points for meditations the human condition, died on Sunday at his home in New York City.

The cause was cancer, said Kate Edgar, his long-time personal assistant.

Dr Sacks announced in February, in an Op-Ed essay in The New York Times, that an earlier melanoma in his eye had spread to his liver and that he was in the late stages of terminal cancer.

As a medical doctor and a writer, Dr Sacks achieved a level of popular renown rare among scientists. More than a million copies of his books are in print in the United States, his work was adapted for film and stage, and he received about 10,000 letters a year. (“I invariably reply to people under 10, over 90 or in prison,” he once said.)

Dr Sacks variously described his books and essays as case histories, pathographies, clinical tales or “neurological novels.” His subjects included Madeleine J, a blind woman who perceived her hands only as useless “lumps of dough”; Jimmie G, a submarine radio operator whose amnesia stranded him for more than three decades in 1945; and Dr - the man who mistook his wife for a hat - whose brain lost the ability to decipher what his eyes were seeing.

Describing his patients’ struggles and sometimes uncanny gifts, Dr Sacks helped introduce syndromes like Tourette’s or Asperger’s to a general audience. But he illuminated their characters as much as their conditions; he humanized and demystified them.

In his emphasis on case histories, Dr Sacks modelled himself after a questing breed of 19th-century physicians, who well understood how little they and their peers knew about the workings of the human animal and who saw medical science as a vast, largely uncharted wilderness to be tamed.

“I had always liked to see myself as a naturalist or explorer,” Dr Sacks wrote in “A Leg to Stand On” (1984), about his own experiences recovering from muscle surgery. “I had explored many strange, neuropsychological lands — the furthest Arcics and Tropics of neurological disorder.”

“I am very tenacious, for better or worse,” he wrote in “A Leg to Stand On.” “If my attention is engaged, I cannot disengage it. This may be a great strength, or weakness. It makes me an investigator. It makes me an obsessional.”

He was also a man of contradictions: candid and guarded, gregarious and solitary, clinical and compassionate, scientific and poetic, British and almost American. “In 1961, I declared my intention to become a United States citizen, which may have been a genuine intention, but I never got round to it,” he told The Guardian in 2005.

Dr Sacks first won widespread attention in 1973 for his book “Awakenings,” about a group of patients with an atypical form of encephalitis at Beth Abraham Hospital in the Bronx.

When Dr Sacks started his clinical career there, in 1966, many of the patients had been catatonic, locked inside themselves for decades as a result of their “sleeping sickness.”

Dr Sacks gave them the drug L-dopa, which was just beginning to be recognized as a treatment for similar symptoms in patients with Parkinson’s, then watched as they emerged into a world they did not recognize.

Some responded better than others - both to the drug and to their changed circumstances - and Dr Sacks used his book to explore the differences and celebrate his patients’ limited rebirth.