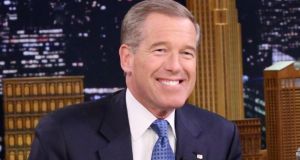 Journalist Brian Williams: “This was a bungled attempt by me to thank one special veteran”. Photograph: Douglas Gorenstein/NBC/Getty Images

NBC News anchor Brian Williams has apologised for claiming he had been on a helicopter that was shot down by ground fire in Iraq in 2003.

The public address announcer at the game explained to the crowd that “US Army Command Sgt Maj Tim Terpak was responsible for the safety of Brian Williams and his NBC News team after their Chinook helicopter was hit and crippled by enemy fire” during the invasion of Iraq.

Sgt Maj Terpak received a standing ovation, and, on Facebook, where NBC posted a video of the story, Williams was also praised. But one commenter cast doubt on the story, which Williams also told in vivid and specific detail to David Letterman in 2013.

“Sorry dude, I don’t remember you being on my aircraft,” wrote Lance Reynolds on Facebook. “I do remember you walking up about an hour after we had landed to ask me what had happened.”

The military newspaper Stars and Stripes, which first reported on the Facebook comment, identified Reynolds as the flight engineer on the helicopter.

He and other crew members told Stars and Stripes that Williams was not in their helicopter that had been shot down but in one that arrived an hour later.

On Wednesday, Williams replied on Facebook and admitted that he had made a mistake, acknowledging that he was not in an aircraft hit by ground fire but instead was in a following aircraft.

“You are absolutely right and I was wrong,” he wrote, adding that he had in fact been on the helicopter behind the one that had been hit. Constant viewing of the video showing him inspecting the impact area, he said, “and the fog of memory over 12 years - made me conflate the two, and I apologise.”

“This was a bungled attempt by me to thank one special veteran and by extension our brave military men and women veterans everywhere, those who have served while I did not,” Williams said. “I hope they know they have my greatest respect and also now my apology.”