Lawyers for boy arrested over home made clock seek $15m 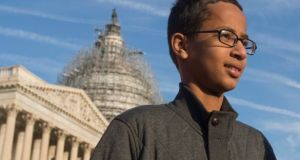 Lawyers for a 14-year-old Muslim boy arrested after taking a home made clock to his Texas school say he was publicly mistreated and deserves 15 million dollars (€14.1 million).

Ahmed took his clock to school in September, and an educator thought it could be a bomb.

The teenager was arrested but never charged. He was suspended from school.

The family accepted a foundation’s offer to pay for Ahmed’s education in Qatar and moved to the Persian Gulf country.

A spokeswoman said the city was reviewing its letter and had no comment.