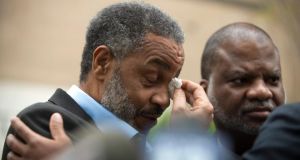 An Alabama man who for years insisted that he had been wrongly convicted of murder, and questioned the forensic evidence that helped send him to death row, was released from prison Friday, ending a legal fight that lasted for about three decades.

The inmate, Anthony Ray Hinton, who was convicted of two murders in the 1980s, walked free on Friday, two days after Jefferson County prosecutors wrote in a court filing that they did “not have sufficient evidence to warrant further prosecution.” A Circuit Court judge, Laura Petro, ordered Mr Hinton’s release.

He stepped out with his lawyer carrying a paper bag of belongings. His supporters rushed toward him for hugs as cameras clicked. Tears and wails of “thank you, Lord! Oh, thank you, dear God,” could be heard.

“The state of Alabama let me down tremendously,” he said. “I have no respect for the prosecutors, the judges. And I say that not with malice in my heart. I say it because they took 30 years from me.”

Mr Hinton was convicted of killing two men in shootings at three restaurants in the Birmingham area in 1985: one in February and two in July. His lawyers said that a third man, who was wounded during one of the July shootings, had incorrectly identified Mr Hinton as the gunman. To bolster their case, defence lawyers cited evidence that appeared to show that Mr Hinton had been at work at the time of the shooting in which he was identified as the assailant.

More pivotally, Mr Hinton’s lawyers complained that state officials had relied on inaccurate forensic assessments of the bullets recovered after the shootings. And prosecutors acknowledged that the forensic studies were essential to their case.

“The only potential evidence that has ever been available to the state to prove that the defendant committed the murders of John Davidson and Thomas Wayne Vason depends upon an absolute, conclusive determination that the bullets recovered from their bodies were in fact fired through the barrel of the firearm taken from the defendant’s home,” prosecutors wrote in their court filing.

Although Mr Hinton and his counsel voiced concerns about the forensic evidence at his original trial, when they used a visually impaired civil engineer as their sole expert, they have been particularly aggressive since 1994, when additional experts reviewed the evidence, and have repeatedly urged the state to examine the bullets again.

Only when officials were preparing to try Mr Hinton again, after the Supreme Court found last year that he had received what the justices described as “inadequate assistance of counsel” at his trial, did they conduct a new study of the forensic evidence.

One of Mr Hinton’s lawyers, Bryan Stevenson, blamed a legal environment intent on scoring courtroom victories, not guaranteeing justice, for the resistance to the review that led to Mr Hinton’s release. “I don’t think it’s just Alabama,” said Mr Stevenson, the executive director of the Equal Justice Initiative, which is based in Montgomery, the Alabama capital. “We’ve gotten into a culture where the pressure to convict and to achieve these outcomes is so great that owning up to mistakes is less frequent than you’d like to imagine.”

The lead prosecutor at Mr Hinton’s original trial died in 2010, and the Jefferson County officials now handling the case did not respond to requests for comment. Through a spokesman, the state attorney general, Luther J. Strange III, declined to comment.

1 Wife not entitled to deceased husband's entire estate, High Court rules
2 President Higgins says British must face up to their history of reprisals
3 Coronavirus: Public health experts considered idea of moving Dublin to Level 4
4 Why are some in Fianna Fáil unhappy with Micheál Martin?
5 Coronavirus: From midnight Dublin will move to level three until October 10th - Taoiseach
Real news has value SUBSCRIBE