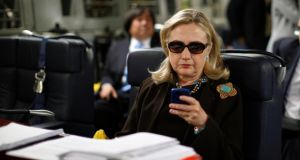 Hillary Clinton: Some say her use of a personal email account while secretary of state will most likely be forgotten long before the 2016 election. Photograph: The New York Times

“I want the public to see my email,” wrote Hillary Rodham Clinton in the online post at 11.35pm on Wednesday. “I asked State to release them. They said they will review them for release as soon as possible.”

The message seemed to have been reproduced as many times over recent days as the black-and-white photo of Clinton on her Blackberry aboard a military airplane. The image, taken from her Twitter profile picture, neatly illustrated the latest controversy in Clinton World.

The furore over the former secretary of state’s use of a private email account for government business when she was President Barack Obama’s top diplomat at the state department between 2009 and 2013 has come at a dreadful time for Clinton. She is widely thought to be in the final stages of preparing a long-awaited announcement she is running for president again in 2016.

The email issue, first reported in the New York Times on Monday, has fired up Clinton’s many detractors, including Congressional Republicans who have been frantically digging for dirt on her for some time in connection with the September 2012 attacks on the US diplomatic compound in Benghazi, Libya.

Clinton’s use of the private email emerged during that House of Representatives committee investigation into the attacks that left four Americans dead. The email account, it later transpired, was traced back to the Clinton’s family home in Chappaqua, New York.

She is not the first secretary of state to use a private email account for official correspondence – Colin Powell did it – although using one solely for government business is regarded as highly unusual.

She was legally allowed to do so as long as she adhered to National Archives and Records Administration rules requiring her to preserve emails sent or received from personal accounts for the agency’s records.

This is all grist to the mill for Republicans, reporters and some within the Democratic ranks who believe that the party needs a Plan B presidential candidate rather than a Clinton coronation, should the controversy explode further. The House committee investigating Benghazi has subpoenaed her emails and written to internet companies telling them of “their legal obligation to protect all relevant documents”.

“It doesn’t matter if the server was in Foggy Bottom, Chappaqua or Bora Bora,” Republican speaker of the House John Boehner said. “The Benghazi select committee needs to see all of these emails because the American people deserve all the facts.”

The US media is busy dredging for old references by Clinton the diplomat berating foreign governments over transparency. It was recalled in recent days that the use of private email for public work was one of the reasons why the US ambassador to Kenya, Scott Gration, was recalled by the Clinton-led state department in 2012. Republican senator John McCain went back further, pointing to Clinton’s hypocrisy for criticising the Bush administration for running “secret White House email accounts” when she was a senator in 2007.

Her successor at the department of state, John Kerry, “all but rolled his eyes”, as the Huffington Post put it, when he was asked about it on a visit to Saudi Arabia. “Let me check on that when I actually have time to pay attention to such an important issue when I get home,” said Kerry when asked about how the department will review the emails to be released.

Most Democrats don’t see this sticking to Clinton.

“An ancillary unintended benefit of having been the focus of the Republican scandal-industrial complex for the last 20-plus years is that the public has become so conditioned to such partisan inquiries that there is a huge discount factor,” said strategist Chris Lehane, who ran damage control in crises that bedevilled the Clinton administration.

Others see the issue feeding the long-held suspicions within the “there is something not quite right about the Clintons” camp pitched around the controversy-prone former first couple.

Until these private emails are released, the frenzy around Clinton on this issue will continue, and that is not good for a woman with bigger things on her mind.