Gullah, a language that emerged among African slaves, gets a new lease of life

Clarence Thomas, the US Supreme Court’s only African-American judge, is a speaker 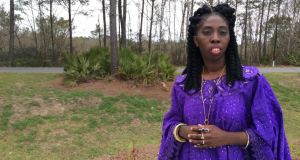 Marquetta Goodwine, known by the Gullah/Geechee people as Queen Quet: “The language hasn’t gone. I like to say that it has just been hidden in plain view.”

On Monday, January 14th, 2013, a curious thing happened at the US Supreme Court – one of the court’s nine justices spoke. That might not seem unusual in most courts, but it was that day in that court.

Clarence Thomas, the court’s only African-American judge, had not uttered a word in almost seven years until he spoke up to poke fun at lawyers from Yale, his alma mater, during arguments in a case.

In the regular back-and- forths between judges and lawyers in America’s highest court, Thomas prefers to listen than participate.

In 2000, during a questions- and-answers session with high school students, the native of coastal Georgia in the US South East explained how he became accustomed to listening.

At the age of 16, Thomas was the only black student in his class in Savannah. He had been raised speaking a dialect called Geechee. “Some people call it Gullah now,” he said, “and people praise it now, but they used to make fun of us back then.”

Fearful of stumbling midsentence into Geechee, he remained quiet. As the self-conscious adolescent became a man, he continued his habit of listening. He didn’t ask questions in college or law school, a practice he largely continues to this day.


Native culture
Marquetta Goodwine, known by the Gullah/Geechee people as Queen Quet, is still unhappy with his comments. She is regularly asked about him and feels he could have championed his native culture.

“He could have used that as a greater platform to inspire younger people, saying ‘I had some shame about it but I don’t any more,’ where everybody feels that he is still ashamed about it,” she said in an interview near where she grew up on St Helena Island in South Carolina next to Thomas’s home state.

An American Creole language, Gullah is derived from west African languages combined with Elizabethan English, described as “King’s English” in parts of Georgia. The language is spoken by the African-American descendants of slaves who populated the coastal areas of the Carolinas, Georgia and northeastern Florida in an area running roughly from Jacksonville in North Carolina to Jacksonville in Florida – a 500-mile stretch that would take you about eight hours to drive.

Known as Gullah in the Carolinas and Geechee in Florida and Georgia, linguistically Gullah is the language while Geechee is the dialect of the language, Queen Quet explains. As official spokeswoman for the people, she uses a conjoined catch-all term to describe them as the “Gullah/ Geechee nation.”

After being the first Gullah speaker to address the United Nations in Switzerland in 1999, Goodwine was elected by her people after a year-long election to become their political and spiritual leader. Since 2000 she has been known as Queen Quet, chieftess of the Gullah/Geechee Nation.


Second term
Now approaching the end of her second seven-year term, Queen Quet estimates that there are 750,000 Gullah/ Geechees. The majority speak Geechee, which she describes as pidgin Gullah, given how it borrows more English words.

During public talks, she finds far more locals understand Gullah/Geechee than they first admit to because of how they have picked it up at home.

“The language hasn’t gone,” she says. “I like to say that it has just been hidden in plain view.”

In striking parallels to the historical suppression of the Irish language, she describes how missionary and public schools, using corporal punishment, taught Gullah/Geechees that their native tongue was backward and would “never get them anywhere in life”.

She jokes now about the number of people she asks in Gullah/Geechee how they are doing who answer her in English.

“They will understand me but they will never respond back in Gullah/Geechee because it was literally beaten out of them,” she says.

This oral language survived by avoiding outside, diluting influences for centuries. The more humane “task system” of slavery in operation on the coastal islands meant that African slaves were assigned to look after their own people rather than the white masters overseeing slaves in the gang system in the Deep South.

Bridges connecting the islands to the mainland were not built until the last century.


Resurgence
There has been a resurgence of interest in the language as young people question what their parents and grandparents had to be ashamed of and take pride in a culture that is uniquely theirs.

Flipping between English and the fast tempo of Gullah, Queen Quet quotes a Gullah/ Geechee proverb to stress the importance of the revival: “If you don’t know where you are from, you have no idea where you are headed.”