First ever Robert Emmet statue re-dedicated at ceremony in US 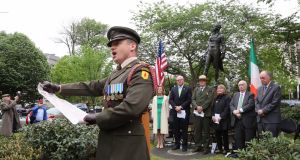 The first statue ever created of Irish revolutionary Robert Emmet has been re-dedicated in Washington DC at a ceremony that also jointly marked the centenary of the 1916 Easter Rising.

The restored bronze sculpture by the Kerry-born Irish-American artist Jerome Connor is the original of four identical statues, including one that stands in St Stephen’s Green in Dublin and another in San Francisco’s Golden Gate Park unveiled by Eamon de Valera in 1919.

Irish ambassador to the US Anne Anderson said at the ceremony that she had no doubt that Irish Americans would “pause here, and reflect, and acknowledge Robert Emmet’s place in the pantheon of Irish heroes.”

In 1912, the Smithsonian Institution offered space in the rotunda of the US National Museum, now the Smithsonian’s Natural History Museum, to a statue for Emmet and Connor was commissioned by a group of Irish Americans.

The statue is now located a short distance from the Embassy of Ireland and the Irish ambassador’s residence in Washington. It was moved there in April 1966 to commemorate the 50th anniversary of the Rising.

President Lyndon Baines Johnson sent a message to the original dedication that year, noting how “the sheer patriotism and the gallant courage of Robert Emmet have inspired Americans no less than Irishmen”.

Betsy Broun, director of the Smithsonian American Art Museum, said that the statue was “a powerful emblem of Irish-American friendship and unity” to a man honoured as the “George Washington of Ireland.”

The US National Park Service has cleaned up the site around the statue to make the sculpture more visible and planted three Irish yew trees nearby.

“He is all washed up - he looks beautiful,” said Washington resident Anne Emmet (73), a descendant of Emmet’s brother Thomas Addis Emmet.

“I am just so proud and patriotic, just full of emotion,” said Kate Wirth, looking at the statue created by Connor, her great-great uncle.

Defence Forces Captain Peter Kelleher, as he did in front of the GPO in Dublin last month, read the 1916 Proclamation at the ceremony that was attended by Congressman Joe Crowley from New York and Dubliner David O’Sullivan, the EU ambassador to the US.

Mr Crowley, who spoke with pride of a portrait of Emmet that hangs in his congressional office, is the lead sponsor of a bill to the US Congress to have the small triangular park renamed Robert Emmet Park.

Emmet, who was strongly influenced by the American Revolution, led a rebellion against British rule, was tried for treason and executed in 1803.