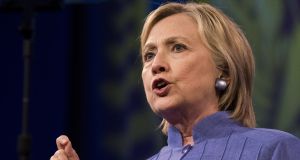 FBI investigators said Hillary Clinton used 13 mobile devices during her four-year stint at the state department but her lawyers told them that they were unable to locate any of them. Photograph: Ty Wright/Bloomberg

The FBI released a report on its investigation into Hillary Clinton’s use of a private email address while serving as US secretary of state and a summary of her July interview with agents.

The agency published the records in the interests of transparency and in response to numerous Freedom of Information Act requests following the FBI’s decision not to bring criminal charges over her handling of classified government information on a private server from 2009 to 2013.

FBI director James Comey has described her handling of classified information as “extremely careless” but has said there was not sufficient evidence to merit a prosecution.

The agency released 58 pages, most of which are either partially or fully redacted.

The documents provide more damaging material for Mrs Clinton’s Republican rival Donald Trump who has halved Mrs Clinton’s lead in the polls over the past two weeks following a barrage of criticism over her emails and ties to donors to the Clinton Foundation, her family’s charity.

During her interview with investigators at at FBI headquarters in Washington on July 2nd Mrs Clinton said that she did not explicitly request permission to use a private email as secretary of state and no one at the state department ever raised concerns about her use of one.

She told the FBI she used a personal email address and Blackberry for personal and official business “out of convenience,” the report says.

The documents show that Mrs Clinton asked former secretary of state Colin Powell when she joined the state department in January 2009 about his use of a personal BlackBerry phone.

“Be very careful,” Mr Powell replied by email, warning that work-related emails could become public. “I got around it all by not saying much and not using systems that captured the data.”

Mrs Clinton told the FBI that he had received no instructions about how to preserve sensitive email material as she was leaving the post of secretary of state because she suffered a concussion and blood clot in her head in December 2012 and “could not recall every briefing she received.”

FBI investigators said that Mrs Clinton used 13 mobile devices during her four-year stint at the state department but her lawyers told them that they were unable to locate any of them.

Huma Abedin, Mrs Clinton’s closest aide, and another former Clinton aide Monica Hanley told the FBI that the “whereabouts of Clinton’s devices would frequently become unknown once she transitioned to a new device.”

Another aide Justin Cooper, who purchased the private Clinton server located in the basement of their home in Chappaqua, New York, recalled two instances where he “destroyed Mrs Clinton’s old mobile devices by breaking them in half or hitting them with a hammer.”

The release of the FBI records comes as the US presidential campaign enters its final stretch to the November 8th election following the official end-of-summer Labour Day holiday on Monday.