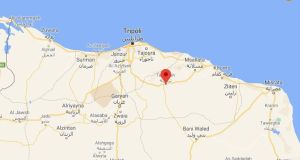 Hundreds of people are missing from Tarhuna, a key town near the capital, Tripoli. Image: Google Maps

A rights group urged Libya’s UN-backed government to investigate the fate of hundreds of people missing from a key town near the capital, Tripoli.

Dozens of mass graves were found there after the withdrawal of a much-feared militia last summer.

In a statement, Human Rights Watch (HRW) quoted Libyan officials as saying at least 338 residents of the town of Tarhuna were reported missing.

The majority of them disappeared during a 14-month-long military campaign led by forces loyal to a rival government to capture the capital, according to the report.

Since 2015, Libya has been divided between two governments, one in the east and another in the west, each backed by a vast array of militias.

In April 2019, east-based commander Khalifa Hifter marched on Tripoli and tried to co-opt some of his rivals’ militias.

At the time, the town of Tarhuna was under the control of the notorious al-Kaniyat militia, which had initially sworn allegiance to the internationally recognised Tripoli government.

But al-Kaniyat changed sides in 2019, siding with Mr Hifter and granting his Libyan Arab Armed Forces troops access to Tarhuna, a strategic town that lies some 41 miles southeast of the Libyan capital.

Since then, the Tripoli government has discovered 27 mass graves but is still working to identify the bodies, said HRW.

“The authorities should act on the grim discovery of mass graves by taking proper steps to identify the bodies and bringing those responsible for abuses to justice.”

In November, the US Treasury sanctioned al-Kaniyat and its leader, Mohamed al-Kani, after finding it responsible for killing civilians whose bodies were discovered in numerous mass graves in Tarhuna, as well as torture, forced disappearances and displacement of civilians.

“Not just al-Kani leaders, but also senior LAAF commanders could be criminally liable for abuses committed by al-Kaniyat militia in Tarhouna for whom they had command responsibility,” Salah said.

Family members of the disappeared told HRW their relatives were not fighters but were targeted because they opposed al-Kaniyat or the 2011 uprising that led to the ouster and killing of longtime dictator Muammar Gadafy, whose rule was supported by the al-Kani family.

Kamal al-Siwi, head of the Tripoli government’s Public Authority for Search and Identification of Missing Persons, told HRW that his agency has exhumed 120 bodies, including women and children, in and around Tarhuna.

Some of the bodies were found handcuffed and most were in an “advanced state of decay”, which made it hard for relatives to identify them, said Mr al-Siwi in the HRW report.

Only three exhumed bodies have been identified so far and returned to their families for burial, said Mr al-Siwi.

He blamed the delay in identifying bodies on a lack of resources needed to operate a DNA analysis laboratory.