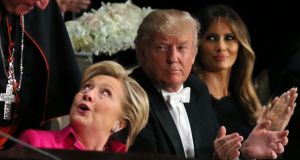 Donald Trump’s path to the White House appears to be narrowing further, judging from a new set of opinion polls that reflect his decline since the three presidential debates.

The Republican presidential nominee and his Democratic opponent, Hillary Clinton, are locked in a statistical dead heat in Georgia, a state that has not voted for a Democratic candidate in 24 years, according to a poll by the Atlanta Journal-Constitution newspaper.

Mr Trump leads Mrs Clinton by 44 per cent to 42 per cent among likely voters in the southern state, with Libertarian Gary Johnson at 9 per cent in the poll. The gap between the two major party candidates falls within the margin of error.

The poll is further evidence of a tightening of the race in Georgia, reflecting how traditional Republican voters are turned off by the divisive Mr Trump and his inflammatory language.

The Republican candidate has lost ground to Mrs Clinton in national polls and must-win battleground states since just before the first television debate on September 26th, when they were virtually tied. Since then, his campaign has been dogged by a leaked 2005 tape capturing his vulgar remarks about sexually assaulting women and accusations of sexual misconduct by 10 women.

The Clinton campaign has intensified its efforts to expand the electoral map, cutting off any hope of Mr Trump reaching the winning majority of 270 electoral votes by injecting more money and sending high-profile campaigners such as Michelle Obama to states that traditionally vote Republican.

A poll this week by the Arizona Republic newspaper and Arizona State University gave Mrs Clinton a 43-38 lead over Mr Trump in the southwestern state, which last voted Democratic in 1996.

She holds a six-point lead over Mr Trump in an average of national polls, according to tracking website Real Clear Politics. This is an advantage which, if repeated on election day, would amount to a decisive victory, similar to Barack Obama’s winning margin over Mitt Romney four years ago.

The bitterness of the election campaign spilled into the traditional Al Smith charity dinner for the two candidates in New York on Thursday night, a quadrennial event that is supposed to be a light-hearted opportunity for the rivals to poke fun at themselves and their opponents.

Mr Trump was booed and heckled as some of his biting jokes about Mrs Clinton came out more like the kind of insults he fires at her during his campaign rallies. His jokes about the Democrat being “so corrupt” and “pretending not to hate Catholics” at the Catholic charity dinner bombed.

“I don’t know who they’re angry at, Hillary – you or I,” he said responding to jeers from the audience of political figures, church leaders and wealthy guests at the formal event.

Mr Trump’s best-received joke touched on the controversy around his wife Melania partly plagiarising a speech by first lady Michelle Obama in her address to the Republican national convention in July.

“The media is even more biased this year than ever before,” he said. “You want the proof? Michelle Obama gives a speech and everyone loves it. It’s fantastic. They think she’s absolutely great. My wife, Melania, gives the exact same speech and people get on her case.”

Mrs Clinton, when it came to her turn, sprinkled her own jokes about Mr Trump with plenty of spice, ridiculing him for his sexist remarks about women.

“People look at the Statue of Liberty and they see a proud symbol of our history as a nation of immigrants, a beacon of hope for people around the world,” she said.

“Donald looks at the Statue of Liberty and sees a ‘four’. Maybe a ‘five’ if she loses the torch and tablet and changes her hair.”