Donald Trump ‘would not back’ other Republican in election

US Republican presidential candidate Donald Trump has said he will not support a fellow candidate for president should he fail to win the party's nomination. Video: CNN/Reuters 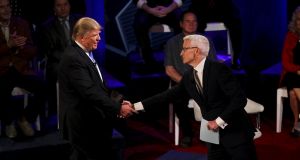 Donald Trump has said he no longer intends to support the Republican presidential nominee if it is not him, despite signing a GOP loyalty pledge last year.

“No, I don’t anymore,” Mr Trump said at a town hall forum on CNN when asked by the moderator, Anderson Cooper. “No, we’ll see who it is.”

When Cooper pointed out that Ted Cruz, Mr Trump’s chief rival for the nomination, had walked up to the line but not crossed it in terms of saying he would not support the nominee, Mr Trump replied, “He doesn’t have to support me.”

Last September, the Republican National Committee chairman Reince Priebus asked Mr Trump to sign a loyalty oath at a time when he left open the possibility of bolting from the party and running as a third-party candidate.

Mr Trump said he would sign, so long as all other candidates did the same. So they all did.

But Mr Trump, amid intense efforts to derail his march toward the nomination in a race in which he has a large lead among delegates to the Republican National Convention, said at the forum that he did not believe he was being treated fairly.

“I have tremendous support right now from the people,” Mr Trump said. “I have many more delegates than him,” he added of Mr Cruz. “I don’t want people to do something against their will, Anderson,” he said.

While the remark amounted to a reversal of position, it might strike voters as more candid than the answer from Mr Cruz. The senator, whose wife Mr Trump threatened to “spill the beans” about after a super PAC formed to stop his candidacy ran an ad featuring an old photo of his former model wife, Melania, stopped short of saying he wouldn’t support Mr Trump.

Instead, he said that such a situation would not come to pass because he himself will be the nominee.

John Kasich was more explicit, saying that if the nominee is someone who “is really hurting the country and dividing the country” then he just wasn’t sure. Pressed by Cooper as to whether he was saying he thinks that’s what Mr Trump is doing, Mr Kasich declined to elaborate.

Mr Trump also gave a lengthy defence of his campaign manager, Corey Lewandowski, who was arrested on misdemeanor battery charges over an episode in which he is accused of grabbing and bruising a reporter speaking with Mr Trump after a news conference.

“She’s not a baby,” Mr Trump said of the reporter, suggesting she had overstated what happened. When Cooper asked if Mr Trump had ever apologised for anything, the New York developer replied, “Oh wow. I don’t know. I’ll think. Can I think?”

He added, “I do believe in apologising if you’re wrong.” And then conceded, “I apologise to my wife for not being presidential on occasion.”