Republican presidential candidate Donald Trump has delivered a blistering attack on the democratic frontrunner Hilary Clinton calling her “crooked Hillary Clinton” and saying that she would be “a horrible president”. Chris Christie's wife, Mary Pat Christie, can be seen reacting to the comments. Video: REUTERS 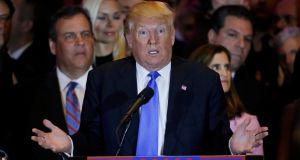 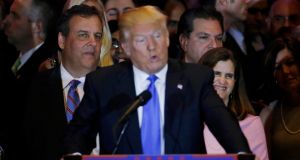 Donald Trump declared himself “the presumptive nominee” to stand as the Republican candidate in November’s presidential election after a clean sweep of five north-eastern state wins on another big night for his campaign.

In the Democratic race, Hillary Clinton scored decisive wins in four of the five state contests, all but extinguishing any hope that her challenger, Vermont senator Bernie Sanders, can block her path to the party’s presidential nomination.

Mr Sanders’s only win in the latest round of multi-state contests in the US presidential election came in Rhode Island in New England.

Mr Trump’s landslide victories in Connecticut, Delaware, Maryland, Pennsylvania and Rhode Island weaken his rivals, Texas senator Ted Cruz and Ohio governor John Kasich, and their supporters in the “Never Trump” campaign in their efforts to stop the businessman’s march to his party’s nomination.

The wins put both candidates in pole positions in the races to win their party nominations and face each other in the US presidential election on November 8th.

“I consider myself the presumptive nominee, absolutely,” Mr Trump told reporters at his victory-night press conference at Trump Tower, his headquarters in New York. “Governor Kasich and Senator Cruz should get out of the race.”

The businessman’s romp in the “Acela primaries”, named after the fast Amtrak train connecting the east-coast states, leaves him 288 delegates short of the 1,237 pledged delegates needed to clinch the nomination. He is the only candidate who can win the Republican race before the party’s national convention in July.

Momentum from last night’s wins, along with upcoming victories in West Virginia, New Jersey and California - three states where Mr Trump is expected to fare well - could deliver him the majority he needs to avoid a convention fight.

Mr Trump said that based on his thumping victory in Pennsylvania - winning 57 per cent of the vote to 21 per cent for Mr Cruz - the 54 unbound delegates from the state who are not obliged to vote for any candidate at the convention had a “moral obligation” to vote for him in the first nominating ballot.

Any doubts that the brash businessman might moderate his tone as he prepared to pivot to a general-election audience were soon erased during his victory speech.

In a blistering attack on the Democratic frontrunner, the reality TV star called her “crooked Hillary Clinton” and said she would be “a horrible president,” offering a glimpse of the brutal campaign expected between the two candidates.

“The only card she has is the woman’s card; she’s got nothing else going,” said Mr Trump.

“And frankly, if Hillary Clinton were a man, I don’t think she’d get 5 per cent of the vote. The only thing she’s got going is the woman’s card, and the beautiful thing is: women don’t like her, okay?”

Social media erupted in commentary about the facial expressions of Mr Christie’s wife Mary Pat who stood behind Mr Trump as he made his remarks.

“I’ll do far more for women than Hillary Clinton will ever do,” the businessman declared at the press conference.

The businessman denied, as one of his campaign aides suggested at a Republican meeting last week, that he was “playing a part” to win the party’s primary and that he would change his rhetoric in the campaign to November.

He said he was not going to change a successful style of campaigning.

“Why would I change?” he said. “If you have a football team and you are winning and then you get to the Super Bowl, you don’t change your quarterback, so I am not changing.”

The businessman even attempted to sow dissent within the opposing party, saying that Mr Sanders had been mistreated by the Democratic Party.

“Frankly, I think Bernie should run as an independent: I think they have treated him really badly,” he said.

Mrs Clinton extended her comfortable lead among pledged delegates to almost 300, giving her 1,640 delegates to 1,331 for Mr Sanders in the race to 2,383 delegates she needs to lock in the nomination.

The backing of an additional 502 super-delegates - Democratic members of Congress, elected officials and party leaders - pushes the Democratic front-runner’s tally to 2,142 delegates and just 241 shy of the winning total.

Responding to his heavy losses in four states, Mr Sanders issued a statement that appeared to mark a turning point in the race. He declined to concede defeat but promised to run “issue-oriented campaigns” in the remaining 14 contests.

The self-professed democratic socialist seemed to distance himself from his previous view that he saw a narrow path to the nomination. Instead he said that he would campaign until the party’s national convention in Philadelphia in July to secure as many delegates to “fight for a progressive party platform.”

“The people in every state in this country should have the right to determine who they want as president and what the agenda of the Democratic Party should be. That’s why we are in this race until the last vote is cast,” said Mr Sanders.

Mrs Clinton celebrated her latest victory in Pennsylvania, the biggest prize of the night with the most delegates at stake, with a speech that looked beyond the primary election to the November battle against the Republican nominee.

She pledged to supporters in Philadelphia that she would unite the party, win the election in November and build a country were “love trumps hate.”

Mrs Clinton scored her big wins in Pennsylvania and Maryland, winning majorities of women and non-white voters who dominated those primaries.

Mr Trump won the support of most evangelical Christians in Pennsylvania, a majority of voters in Connecticut who were angry with the government and conservatives in Maryland - all voters who went to the polls in large numbers.

Leaving her victory party, Mrs Clinton’s supporters felt Mr Sanders should withdraw from the race after her resounding victories and help unite the party.

“He has done a lot of good things in the campaign but I think it’s time to step aside. Simple maths tells you that,” said Sara Jacobson (43), a teacher at a Philadelphia law school, on her way out of the convention centre.

“Frankly, I think he should stop taking money from millions of Americans when he knows he can’t win.”