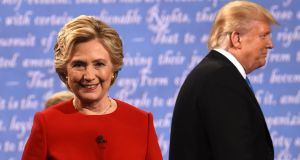 Hillary Clinton and Donald Trump leave the stage after the first presidential debate at Hofstra University on Monday night. Both could salvage positives from the encounter. Photograph: Timothy A Clary/AFP/Getty Images

Donald Trump’s post-debate complaint – that his microphone was not working – was like a boxer claiming that one of his gloves had not been laced up properly during his first qualification fight.

The search for an artificial handicap following his first bruising encounter with Democrat Hillary Clinton on Monday night suggests that Republican was not altogether pleased with his performance, despite the confident declarations from both corners claiming a victory.

The stakes were high for this first debate, given the recent narrowing of Clinton’s lead in the polls, the number of undecided voters (as many as one in five, by some estimates) and a possible Super Bowl- sized audience (expected to be up to 100 million) tuning in to compare the candidates.

The divided opinion on who won the debate at Hofstra University in New York – media pundits gave the points to Clinton, while most online polls handed a victory to Trump – suggests more about the distorted lens through which this most polarising of presidential elections is viewed.

Both could take something from this debate. The billionaire property developer, in his even-handed early moments, scored his biggest points. He questioned the former secretary of state’s ability to create blue-collar American jobs as an insider who had been in politics for years.

But the wheels came off for Trump about 20 minutes into the 90-minute debate when he abandoned any plan to appear nuanced or even knowledgeable, choosing to lean on the bold declarations that have characterised his bumper-sticker stump spiel.

Clinton, in contrast, was prepared and ready, peppering her contributions with rehearsed lines and terse zingers.

While Trump called her “Secretary Clinton” throughout, she called him “Donald”, adding to the sense that he was out of depth.

Castigating his “trumped-up trickle-down” economics and questioning his hand-me-down career start and business acumen seemed to be breaking points for the thin-skinned Trump.

“Well, Donald, I know you live in your own reality, but that is not the facts,” Clinton said, responding to one of Trump’s rare truthful claims about her past support of a free trade deal.

This was a confident, assured Clinton, displaying all the skills of a experienced debater who had consumed the research file on her opponent. Trump’s free-wheeling style and lack of preparation meant he resorted to cack-handed attempts to deny past statements and positions but ended up squirming on charges of racism and sexism, and resorted to insults to score points.

During his interrupting, shouting, finger-jabbing and some strange sniffling – all magnified in the close-up split-screen visual of the TV debate – Trump came across as a tone-deaf arch-capitalist, not the “blue-collar billionaire” fighting for American workers.

The belligerent posturing that made him stand out on a stage full of candidates in the Republican primaries made him look petty and small in the more sober confines of a head-to-head debate.

She accused him of pushing “a racist lie” by claiming that Barack Obama, the first black president, was not a US citizen, and of having “a long record of engaging in racist behaviour”. Trump responded by pointing out how he opened up one of his Florida golf clubs to black members.

Clinton reminded voters that Trump had called women “pigs, slobs and dogs” and he responded by babbling about his long-running dispute with comedian Rosie O’Donnell. He had no defence to the accusation that he called Venezuela- born Alicia Machado, one of his former Miss Universe beauty contestants, “Miss Piggy” and “Miss Housekeeping” because of her Latina roots.

“Donald, she has a name,” Clinton said. “And she has become a US citizen. And you can bet she’s going to vote this November.” It was a hard hit.

Not once did Trump mention Clinton’s “basket of deplorables” comment that has fired up his supporters, the Clinton Foundation, the Benghazi attack of 2012 or her ties to Wall Street. He did not even touch on his immigration policies or his plan to build a wall along the border with Mexico, the centrepiece of his campaign. It reflected just how untethered Trump became during this debate.

Clinton may have denied him presidential moments, but her own performance was far from a triumph. Leaving her sharp one-liners aside, she left unaddressed lingering questions about her trustworthiness.

Still, after 90 minutes, she emerged likable enough, as Obama once called her, and the momentum she built over the course of the debate should carry through to her poll numbers.

Trump has two more debates to get his act together. After Monday night, he may even prepare for them.