Donald Trump fires back at Romney after stinging attack 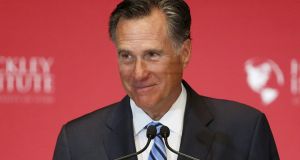 Escalating the party establishment’s efforts to derail the insurgent candidate’s surge in the race to be the Republican nominee, Mr Romney tore through the billionaire New Yorker, describing him as a “con-artist” whose demeanour is “recklessness in the extreme.”

“His is not the temperament of a stable, thoughtful leader. His imagination must not be married to real power,” he said, labelling Mr Trump “a phoney, a fraud” whose “promises are as worthless as a degree from Trump University,” the businessman’s now defunct university.

“He’s playing the American public for suckers: he gets a free ride to the White House and all we get is a lousy hat,” said Mr Romney.

He was referring to Mr Trump’s ubiquitous red caps emblazoned with the campaign slogan, “Make America Great Again,” that has fired up voters angry with the political establishment who want an outsider as their nominee.

Mr Trump fired back at Mr Romney during a rally, calling the former nominee a “choke artist” and saying he was disappointed by the 2012 campaign he lost to Barack Obama.

“The guy ran one of the worst campaigns in the history of politics,” the businessman told a rally in Maine.

The property developer claimed the former candidate begged him for cash during his 2012 campaign and “chickened out” of this year’s presidential race because he would have faced him.

“A business genius he is not,” said the former venture capitalist. He went beyond the personal too, slating Mr Trump’s policies.

His proposed 35 per cent tariff on foreign goods “would instigate a trade war” and raise prices for consumers, kill America’s export jobs and “lead entrepreneurs and businesses of all stripes to flee America”.

Mr Romney, who considered entering the race last year, categorically ruled out becoming a candidate and refused to endorse any of Mr Trump’s rivals.