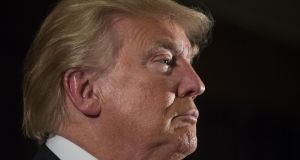 In a series of complaints on his Twitter account, Donald Trump said: “Ted Cruz didn’t win Iowa, he stole it”. Cruz’s team hit back by telling Trump to seek help for addiction to the social media site. Photograph: Scott Eisen/Bloomberg

Campaigning for the Republican nomination at the US presidential election took a nasty turn on Wednesday with billionaire businessman Donald Trump accusing rival Ted Cruz of fraud as the field of candidates narrowed ahead of next week’s New Hampshire primary.

Rand Paul, a senator from Kentucky with a libertarian philosophy, pulled out of the Republican race and CNN said conservative Rick Santorum was also quitting. Both candidates did poorly in Monday’s Iowa caucuses, which were dominated by Mr Cruz’s defeat of Mr Trump.

The property mogul on Wednesday accused Mr Cruz, a US senator from Texas, on Twitter of stealing his victory in Iowa. Mr Cruz’s team hit back by telling Mr Trump to seek help for addiction to the social media site.

The two men are going head-to-head for voters in New Hampshire, where Mr Cruz’s evangelical Christian credentials will not be as helpful as they were in Iowa. Mr Trump holds big leads in opinion polls of Republicans in New Hampshire.

Mr Trump called for the nullification of Mr Cruz’s Iowa victory or a new vote in the state, which holds the first nominating contest in the presidential election. “Ted Cruz didn’t win Iowa, he stole it,” Mr Trump said in a series of tweets. “That is why all of the polls were so wrong and why he got far more votes than anticipated. Bad!”

Based on the fraud committed by Senator Ted Cruz during the Iowa Caucus, either a new election should take place or Cruz results nullified.

Ted Cruz didn't win Iowa, he stole it. That is why all of the polls were so wrong and why he got far more votes than anticipated. Bad!

Mr Trump referred to an email that Mr Cruz’s campaign sent on Monday that implied another Republican candidate, Ben Carson, was about to drop out of the race and that his Iowa backers should be urged to vote for the Texan instead. Mr Cruz later apologised for the email.

Mr Trump also accused Mr Cruz’s team on Twitter of sending out a flyer designed to look like an official electoral document to scare Iowa voters into turning out at the caucuses.

The Cruz campaign said Mr Trump was just clamouring for attention after the senator came from behind in the polls to beat him on Monday. “Reality just hit the reality star – he lost Iowa and now nobody is talking about him, so he’s popping off on Twitter,” Mr Cruz spokesman Rick Tyler said in a statement. “There are support groups for Twitter addiction, perhaps he should find his local chapter.”

A Tea Party fiscal hawk, Mr Cruz won support in Iowa from much of the same conservative Christian constituency that helped Mr Santorum to victory in the Iowa caucuses during the 2012 presidential campaign.

Mr Santorum, a former US senator from Pennsylvania, has failed to take off in this campaign. CNN, citing unidentified sources, said he planned to suspend his run for the White House later on Wednesday and would endorse another candidate.

Earlier on Wednesday, Mr Paul became the second Republican to drop out of the race since the Iowa caucuses, behind former Arkansas governor Mike Huckabee. “It’s been an incredible honour to run a principled campaign for the White House,” he said in a statement. “Today, I will end where I began, ready and willing to fight for the cause of Liberty.”