Democrats meet in City of Brotherly Love to crown a sister 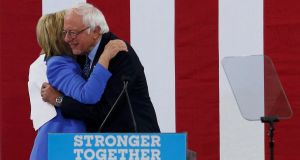 Democrats will descend on Philadelphia, the City of Brotherly Love, on Monday for a very public display of sisterly affection: the announcement of Hillary Clinton as the party’s presidential nominee. She will be the first woman to lead a major American political party into a White House election.

It is a fitting location for the historic achievement, 240 years after the United States was founded in the city. After the circus of the Republican convention, Democrats will be hoping for a controversy-free confab. Party unity is the key theme of the meeting, but then that was on this week’s Republican agenda, too.

“What I hope is accomplished after the four days is that people will see we are taking about an inclusive message and actually have ideas – and put these ideas into actions – and [that people will] contrast that with the crazy carnival we are seeing out in Cleveland,” says Brendan Boyle, a Pennsylvania congressman.

Democrats are hoping to start the convention on the right conciliatory note as the Vermont democratic socialist Bernie Sanders, who ran a tougher-than-expected race against Clinton, is among the headline acts on the first night, speaking on the theme of “stronger together”.

Unlike in the Republican Party, the runner-up in the Democratic race has already endorsed his erstwhile rival, so few are expecting the type of fireworks that exploded in Ohio. “I predict a largely newsless convention,” says Jim Manley, a Democratic strategist. “Republicans can try to compare it to their hearts’ content, but this is going to be radically different.”

Just as the Republicans lashed Clinton all week, expect the Democrats to return the favour with Donald Trump.