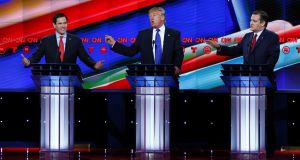 The mocking and insulting spilled into another day as Republican presidential frontrunner Donald Trump sought to rebound from a bruising debate on Thursday night by stealing the limelight from rivals Marco Rubio and Ted Cruz with a head-turning endorsement.

The billionaire, looking to avoiding ceding any momentum from three consecutive state wins, unveiled a new supporter: New Jersey governor Chris Christie, who dropped out of the race two weeks ago.

Presenting Mr Christie at a news conference in Texas, which votes next week in the bumper “Super Tuesday” day of 11 state contests for Republicans, Mr Trump regained some ground from Mr Rubio and Mr Cruz, the two first-term senators who landed heavy blows during the 10th presidential debate in Houston.

Buoyed by three straight wins in New Hampshire, South Carolina and Nevada (out of four contests), the entertainment mogul has added an experienced politician with a national profile to his support base, as well as the man who hurt Rubio most in the campaign.

“[The Clintons] know how to run the standard political playbook against junior senators and run them around the block,” said Mr Christie. “They do not know the playbook with Donald Trump because he’s rewriting the playbook.”

Although this campaign has shown that big-ticket endorsements have not changed the overall dynamic of the race, Mr Trump said Mr Christie’s endorsement was the one “I wanted to get”.

Recruiting the purple-state governor to his corner also allowed Mr Trump to poke fun at Mr Rubio after the Florida senator subjected the businessman to repeated attacks during Thursday night’s debate. During a ferocious two hours of debating, the 44-year-old chided Mr Trump over his inherited fortune that started his starry business career, his past employment of illegal workers on property developments and his sketchy healthcare plan and foreign policy.

Shedding any reservations about a Trump counter-attack that has irreparably hurt others, Mr Rubio continued his full-scale assault on the businessman yesterday, savouring what many commentators called a victory over the brash businessman.

The Floridian spent about 10 minutes of a rally in Dallas, Texas, yesterday ridiculing the tycoon by reading out his misspelt tweets (later deleted by Mr Trump), mocking his back-stage debate antics and insinuating that he urinated on himself during the heat of the debate.

He said Mr Trump had “one of those little sweat moustaches,” and that he had asked for a full-length mirror, “maybe to make sure that his pants weren’t wet.”

Mr Trump let fly at his own campaign event, resurrecting stock attacks against Mr Rubio, calling him a “choker”, “a wise-guy”, “lightweight” and a “clown”, and saying he was the one who sweats.

“I have never seen a human being sweat like this man sweats. It looked like he had just jumped into a swimming pool with his clothes on.”