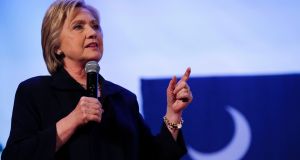 As the US presidential election juggernaut has turned firmly south from the largely white midwest and north east, Republican and Democratic candidates are casting themselves at new voters ahead of the biggest day of the primary election next week on Super Tuesday.

In the Democratic contest, Hillary Clinton, the frontrunner with the momentum of two out of three wins, and upstart socialist Bernie Sanders are appealing to African-American voters to get out and vote today for the first time in the “first in the south” South Carolina primary.

Just over half of the state’s Democratic voters are black and Clinton has held her lead among African-Americans, despite Sanders’s crusade against economic inequality that affects so many in their community.

That’s not to say Sanders hasn’t made an effort. The Vermont independent has been courting the black vote and drawn support from the likes of singer-activist Harry Belafonte and actor Danny Glover.

Film director Spike Lee joined the battle of the black presidential endorsements this week, taking up arms with Sanders’s campaign too in a new radio advert this week aimed at black millennials. Lee, the director of Do The Right Thing, shouts “Waaaaake up!” in the ad, a reference to the famous line from his 1989 film.

Not to be by outdone by Sanders’s star pulling power, Clinton enlisted actor Morgan Freeman. His velvety voice reminded black voters in a Clinton campaign advert that she has said the names of black Americans who died in police custody: Trayvon Martin, Sandra Bland and Dontre Hamilton, and raised the plight of residents in the majority-black city of Flint, Michigan during its water crisis.

Along with her strong lead in South Carolina, a Monmouth University poll earlier this month showed Clinton leading Sanders by 60 per cent to 26 per cent. The Vermont senator has been unable to hitch his universal message of income inequality to racial inequality and has hit Clinton’s “firewall”.

Much like how Donald Trump’s profile among white voters is paying off, so too is the long-standing popularity of the Clintons among African- Americans in the south, despite the effects of Bill Clinton-era policies – the 1994 crime bill and 1996 welfare reform bill – on the community.

On paper, Sanders should be playing better with a predominantly black southern audience: he walked with Dr Martin Luther King Jr in the march in Washington, was arrested as a student at the University of Chicago while protesting against housing segregation and has long been an outspoken critic of racial injustice.

The New York Times columnist Charles Blow wrote this week that, “Sanders’s compelling narrative on civil rights advocacy is strangely devoid of southern touchstones.” He noted that Clinton, by contrast, lived in Arkansas as wife to governor Bill for almost two decades and championed education and children’s rights, a point the former president regularly mentions on the stump in his sing-songy southern drawl.

Blow, an African-American, in another column raged about “Bernie-splaining” by the senator’s supporters: “If only black people knew more, understood better, where the candidates stood – now and over their lifetimes – they would make a better choice, the right choice,” he wrote of their argument. “The level of condescension in these comments is staggering.”

A lack of familiarity is an additional problem for Sanders down south. Monmouth’s poll found almost a third of black voters didn’t have an opinion about Sanders, more than twice the number for Clinton.

The problem of not identifying with black voters cropped up in the Republican race this week. Bottom-in-the-polls Dr Ben Carson, the African-American retired neurosurgeon, blew up a storm of controversy when he said Barack Obama was “raised white.”

“He didn’t grow up like I grew up,” said Carson, of his feted ghetto-to-greatness life story. In other words, Carson believes Obama isn’t really black because he didn’t grow up poor. This may go down well with some voters down south, but when it comes to the Bible Belt states, it will be more about religion than race.

But with big southern African-American electorates among about a dozen states voting on Tuesday – and almost half the Republican delegates needed to win the party nomination and a third on the Democratic side up for grabs – how black voters identify with candidates matters.