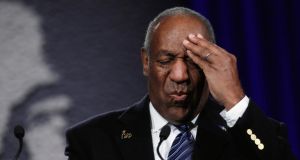 Bill Cosby: made admissions over four days of intense questioning 10 years ago at a Philadelphia hotel. Photograph: Lucas Jackson/Reuters

He was not above seducing a young model by showing interest in her father’s cancer. He promised other women his mentorship and career advice before pushing them for sex acts. And he tried to use financial sleight of hand to keep his wife from finding out about his serial philandering.

Bill Cosby admitted to all of this and more over four days of intense questioning 10 years ago at a Philadelphia hotel, where he defended himself in a deposition for a lawsuit filed by a young woman who accused him of drugging and molesting her.

Even as Cosby denied he is a sexual predator who assaulted many women, he presented himself in the deposition as an unapologetic, cavalier playboy, someone who used a combination of fame, apparent concern and powerful sedatives in a calculated pursuit of young women – a profile at odds with the popular image he so long enjoyed, that of father figure and public moralist.

In the deposition, which Cosby has for years managed to keep private but which was obtained by the New York Times, the entertainer comes across as alternately annoyed, mocking, occasionally charming and sometimes boastful, often blithely describing sexual encounters in graphic detail.

He talked of the 19-year-old aspiring model who sent him her poem and ended up on his sofa, where, Cosby said, she pleasured him with lotion. He spoke with casual disregard about ending a relationship with another model so he could pursue other women.

“Moving on,” was his phrase. He suggested he was skilled in picking up the nonverbal cues that signal a woman’s consent. “I think I’m a pretty decent reader of people and their emotions in these romantic sexual things, whatever you want to call them,” he said.

Interest in Cosby’s deposition grew this month when a federal judge unsealed a 62-page memorandum of law in the case, which had been settled in 2006. The memorandum contained excerpts from the deposition, including Cosby’s acknowledgment that he had obtained quaaludes – a sedative – as part of his effort to have sex with women.

The parties have been prohibited from releasing the memorandum because of a confidentiality clause that was part of the settlement agreement, but the deposition itself was never sealed. This month, Constand’s lawyer asked the court to lift the confidentiality clause so her client would be free to release the nearly 1,000-page deposition transcript. The New York Times later learned that the transcript was already publicly available through a court reporting service.

Cosby has never been charged with a crime and has repeatedly denied the accusations of sexual assault, now levelled by dozens of women. David Brokaw, Cosby’s publicist, did not respond to requests for comment on Saturday. In three suits, women who accused Cosby of sexual misconduct are pursuing civil claims against him. In addition, the Los Angeles police have said they are reviewing a complaint of a sexual nature against Cosby. Troiani declined to comment.

While Cosby described encounters with many women through the course of his deposition, it is through his long and detailed descriptions of his relationship with Constand, who is much younger, that Cosby’s attitudes, proclivities and approach to women are most clearly revealed. Constand was present for at least some of Cosby’s testimony in the Rittenhouse Hotel in Philadelphia.

First spotting Constand at Temple University in the early 2000s, Cosby said he felt romantic interest immediately (“She’s good-looking”), and began a relationship that led, in his telling, to dinners and more. Asked how he wooed her, Cosby, who has been married since 1964, responded: “Inviting her to my house, talking to her about personal situations dealing with her life, growth, education.”

Yet the friendship endured for a few years, until one night at his Pennsylvania home, when Constand said Cosby drugged and molested her. Cosby said he gave her 1½ tablets of Benadryl to relieve stress, they kissed and had sexual contact. Her lawyer said she believed it was a much more powerful drug. Some time later, after Constand had moved home to Canada, Cosby spoke with Constand’s mother on the telephone. The mother, he said, was upset about what her daughter said Cosby had done, describing the experience as “a mother’s nightmare”.

In the deposition, he said he was worried that Constand’s mother would think of him as a “dirty old man”. During the call, Cosby told the deposing lawyers, he wanted Constand to tell her mother “about the orgasm” so that she would realise it was consensual. “Tell your mother about the orgasm. Tell your mother how we talked,” he said he remembered thinking. Subsequently, concerned that Constand and her mother might seek to embarrass him, he said he offered to help pay for Constand’s further education. Years earlier, he offered to reward another woman, Therese Serignese, whom he had met at the Las Vegas Hilton in 1976, with money as a bonus for good grades.

Though he portrayed the drug-taking and sex as consensual, Cosby – when asked whether Serignese was in a position to consent to sexual intercourse after he gave her quaaludes in 1976 – said: “I don’t know.” Joseph Cammarata, a lawyer for Serignese and two other women who are suing Cosby for defamation, said of the deposition: “This information is important because it sheds light on the private practices of a man who holds himself out as a public moralist.”

During the questioning, Cosby cast himself as a sensitive and attentive supporter of Constand, though his tone changed when addressing Constand in the present tense. Asked by Constand’s lawyer about how he felt when Constand cried during her own deposition, Cosby was unsparing: “I think Andrea is a liar and I know she’s a liar because I was there. I was there.”

And he could be dispassionate in recalling former relationships. With a woman named Beth Ferrier, a model he met in the 1980s, he recalled inquiring after her career and her father, who had died of cancer. “Did you ask her those questions because you wanted to have sexual contact with her?” Troiani asked. “Yes,” Cosby responded.

In the deposition, Cosby described sexual liaisons – he sometimes calls them rendezvous – with at least five women, and having a “romantic” interest in two more, in locations like Denver, Las Vegas, New York and Pennsylvania, in hotels or in one of his homes.

In the court case, 13 women came forward with anonymous sworn statements to support Constand, saying that they, too, had been molested in some way by Cosby. But they never had a chance to pursue their claims in court because, six months after the fourth and final day of his deposition, Cosby settled the case with Constand on undisclosed terms. His deposition was filed away, another document in a settled court case, until now. – (New York Times service)