Hillary Clinton praised the backing of the Irish-American community when her husband was president and negotiating the Good Friday Agreement in 1998. She was speaking just hours before the crucial New York Primary. Video: Simon Carswell 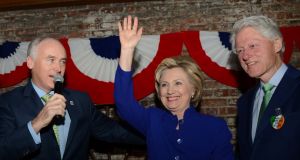 Former US president Bill Clinton has advised Irish politicians to work together rather than stick to their positions in an effort to break the political impasse and form a new government.

Mr Clinton was speaking to The Irish Times at the final campaign event for his wife Hillary Clinton at Fitzpatrick’s Grand Central Hotel in New York last night before voting begins today in the state’s key Democratic primary election to pick a candidate to stand for president.

Asked what advice he would give to the parties deadlocked without a majority after the general election, Mr Clinton said: “Well, you can’t form a government until you believe that it’s better to work together than hold firm.”

Speaking for the second time about the post-election situation in Ireland in a month, Mr Clinton said he didn’t know “enough about the underlying circumstances to know whether the time is right yet” for the parties to be able to reach an agreement on forming a government.

“But I know sooner or later that Ireland needs a government to go forward,” he said at the end of the event at the Manhattan hotel.

Irish hotelier John Fitzpatrick hosted the “primary eve celebration” at The Wheeltapper Pub in his Grand Central Hotel as about 200 supporters of the Clintons cheered and held “Irish Americans for H” and green shamrock posters with Mrs Clinton’s campaign logo.

“What a way to finish a campaign on a home run,” Mr Fitzpatrick said at the informal event, before paying tribute to Mrs Clinton’s work as secretary of state and Mr Clinton’s contribution to the Northern Irish peace process.

Speaking before his wife, Mr Clinton again quoted William Butler Yeats’s line “too long a sacrifice can make a stone of the heart,” saying that Hillary Clinton had “spent an entire lifetime taking the stones out of the heart by making good things happen”.

He repeated an anecdote from his campaign stump speech, applauding Mrs Clinton’s intervention in speaking to the Northern Irish parties to break a stalemate in talks in 2010 - a story recounted to him by a former British secretary of state for Northern Ireland.

Mr Clinton said that he recently read an original copy of the 1916 Proclamation and noted that it was written one year before women were granted the right to vote in the US and had equal rights and opportunities for men and women as one of its objectives.

Returning from separate events in the state after a day of campaigning for her second run at the White House, Mrs Clinton said that the couple wanted to “be once again with our dear friends”.

She praised the backing of the Irish-American community when her husband was president saying it made it possible for the US to play a role in bringing about the Good Friday Agreement in 1998.

That involvement put the US in “a unique position to use our good offices to bring people together who do not want to talk to each other, who do not even want to sit at the same table as each other”.

“This is not glamorous work,” she said.

“This is hard, slow, persistent work of making it possible to create peace where there has not been that opportunity before.”

Mrs Clinton said that as president she would look for similar opportunities for peace elsewhere in the world “to help recreate the same conditions for those who are labouring under conflict”.

The former US senator for New York is the front-runner in the party’s primary elections, leading Vermont senator Bernie Sanders by an average of 12 points in polls in the Empire State.

New York has the second most number of nominee-picking pledged delegates up for grabs in the Democratic race.

Supporters at the Irish-American event last night were confident that she would win New York by double digits in what would be her first win after a string of seven straight state victories for Mr Sanders and extend her lead in the race to win the Democratic nomination.

“This puts it away in a lot of ways,” said Mr O’Dwyer. “This becomes the mathematic certainty for her nomination.”