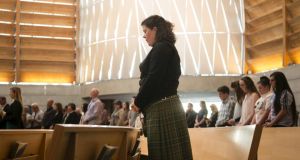 Claire Raftery, a former Dubliner now living in San Francisco, stands during a special Mass for the victims of the Berkeley balcony collapse in Oakland, California. Photograph: Reuters

Family members of five of the six Irish students who died in the balcony collapse accident in Berkeley, California, want to bring their bodies back to Ireland by Monday at the latest but earlier if arrangements can be made, said an Irish priest in nearby Oakland.

Fr Aidan McAleenan, a priest at St Columba Catholic Church in Oakland, said that the relatives of the five deceased from Ireland - Olivia Burke (21), Eoghan Culligan (21), Niccolai Schuster (21), Lorcan Miller (21) and Eimear Walsh (21) - hoped to bring them home before an Aer Lingus flight scheduled for them on Sunday.

Family members who had travelled over from Ireland on Tuesday and Wednesday would be able to see the remains of their loved ones today after they are moved from the coroner’s mortuary, he said.

“They will see them in the morning and then they will take them home on Monday at the latest,” he said.

Fr McAleenan was speaking after a memorial mass for the victims of Tuesday’s accident held at Christ The Light Cathedral in Oakland attended by about 300 people.

Six Irish J-1 students were killed and seven were injured when the fourth-floor balcony they were standing on collapsed during a birthday party celebration at the Liberty Gardens student apartment complex on Kittredge Street.

This is expected to take place on Saturday.

Ms Donohue would be buried in Rohnert Park and both families would then travel with Ms Burke’s remains to Ireland for her burial.

Fr McAleenan said that he had visited John Nuir Hospital in Walnut Creek, about 16 miles east of Berkeley in California, where two of the injured, Conor Flynn and Jack Halpin, were being treated.

“One of them had a broken leg and was out surgery yesterday and was doing fine, and the other had a punctured lung but nothing life-threatening,” said the priest, a native of Banbridge, Co Down.

He said that a group of their friends had stayed with them, sleeping on hospital floor since the accident took place on Tuesday morning.

“It was absolutely amazing,” said Fr McAleenan. “I have never seen anything like it in my experience how well everybody has come around them and loved them and cared for them.”

The priest said that the two young men, among seven injured, two of them critically in Tuesday’s accident, would make a full recovery.

“They are fine,” he said. “The surgeons came down and talked to us. They were young and vibrant and they would be able to bounce back. Some of them might need more minor surgeries but nothing life-threatening.”

Fr McAleenan delivered the homily at the Wednesday evening memorial mass, which was celebrated by Bishop of Oakland Michael Barber and a number of other priests, including one who had travelled from Ireland with family members of some of the deceased.

He spoke about the importance of faith and how people “may want to lash out and talk about the balcony, how it was built and the wood rot” and that they want to talk about why some students went to the party and other stayed at home.

Speaking to The Irish Times after the mass, Bishop Barber said he phoned Archbishop of Dublin Diarmuid Martin in Ireland on Wednesday morning to discuss the Berkeley tragedy.

“I expressed all of our condolences from America, from our diocese here in Oakland and asked him to pass it on to all the relatives and families,” he said.

“I asked him to pass it on to all the friends and relatives and families of the deceased over there in Ireland so we are united in our grief but also in our faith.”