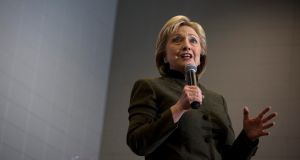 Hillary Clinton, the Democratic presidential frontrunner, has been hitching her wagon to the American labour movement as she tries to corral votes away from her rival, socialist senator Bernie Sanders.

In a new campaign ad this week, Clinton highlighted her appreciation for the host of national trade unions who have endorsed her.

The alliance seems strange, given that Sanders’s policies appear to be more closely aligned with the kind of fights unions take on. Certainly, local unions are enthusiastic about Sanders, but nationally they clearly see Clinton as the more electable, despite her newfound opposition to the Trans-Pacific Partnership, the free trade deal she backed in Barack Obama’s cabinet, which unions see as a job killer.

The messaging fits in with Clinton’s broader manifesto of being the champion of the American middle class. She knows, like all smart politicians, that the support of big-union leaders can be critical in shoring up votes on the Democratic Party’s left flank.

Quill led a 12-day strike against the city in 1966 after clashing with its mayor, John Lindsay. The Kerry-born union leader stopped the world’s largest subway and bus system, which served eight million people. Despite a spell in jail for contempt of court after breaching a judge’s injunction, Quill and his union secured a large pay rise.

The victory celebrations were shortlived for the union leader; he died of a heart attack at the age of 60, three days after the union’s success.

Limerick historian Brian Hanley, in an intriguing article for History Ireland magazine in 2004, wrote about why one of the most generous tributes to the Irish-American union leader came from a significant American public figure: civil rights leader Martin Luther King jnr.

Extolling Quill as “a man the ages will remember”, King hailed him as a “fighter for decent things all his life: Irish independence, labour organisation and racial equality”. He praised him for being “bold enough and tough enough” to speak out about racial discrimination when others wouldn’t.

“Negroes had desperately needed men like Mike Quill who fearlessly said what was true even when it offended. That is why Negroes shall miss Mike Quill,” said King in his tribute.

The Kerryman’s union promised at the outset to organise for all workers in the transit industry “regardless of race, creed, colour or nationality”. In the 1950s, Quill organised support for the campaign against racial segregation, raising funds to pay bail for those arrested while attempting to desegregate restaurants in the American South.

His union, which today has a largely black, Hispanic and immigrant membership, still celebrates its Irish origins half a century after Quill’s death. It holds an annual James Connolly event in March every year.

The strong political ties between Irish groups and the American labour movement continue to this day. Irish American Democrats, a group strongly backing Clinton this year, is hosting a centenary event in Washington in March to commemorate the financial support provided by US organised labour to the 1916 Easter Rising.

There may even be “principals” from the Clinton campaign at the event, one source said, with US public figures and the Irish-American labour leaders once again joining forces, just like in Quill’s day.