US urges light-touch regulation of emissions as climate heats up 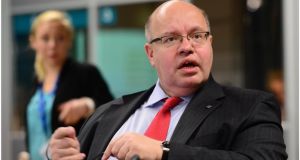 Starting tomorrow, German environment minister Peter Altmaier and his Polish counterpart, Marcin Korolec, will jointly host the fourth Petersberg Climate Dialogue in Berlin, involving a representative group of 35 of their colleagues from all regions of the world. Photograph: Bryan O’Brien

The first round of climate talks in 2013 may have been quite relaxed, but this didn’t disguise significant differences between the parties on whether the architecture of a new global agreement in 2015 should be a Kyoto Protocol-style “top-down” structure or something much looser.

But the US and its allies have been pushing for a light-touch “pledge and review” process, with every country making a “contribution” to global efforts to bridge the yawning gap between burgeoning emissions and the agreed target of limiting global warming at 2 degrees.


Man in the middle
Europe’s position is somewhere in between. Although it agreed to renew the Kyoto Protocol, which expired last year, no new targets have been set and, in the meantime, the EU’s “flagship” emissions trading scheme has run aground due to a collapse in carbon prices.

The most dire prognosis in Bonn this week came from Australian economist Prof Ross Garnaut. He warned that adaptation to climate change was only relevant for moderate warming of 2 degrees; beyond that, there would be “a breakdown in national and international order”.

Presumably, this explains why 10 leading polar scientists have been summoned to the White House to spell out the implications of vanishing summer sea ice in the Arctic – for high-level representatives of the Pentagon, Nasa and the US Department of Homeland Security.

According to Prof Carlos Duarte, of the Oceans Institute at the University of Western Australia, Arctic sea ice could be gone as early as 2015 – much faster than earlier predictions. “This situation has the momentum of a runaway train,” he said.


US holds back
Yet the US – supported by Canada, Japan, Russia and a growing number of other parties – wants a flexible climate regime under which every country would choose its own emissions reduction target based on national circumstances and then tweak this for “adequacy” over time.

Given that the deal to be done in 2015 won’t come into force until 2020, a second “workstream” at this week’s talks focused on how existing inadequate pledges could be racheted up between now and then – with some progress reported.

Various parties outlined what they were doing – notably China, which has taken the lead in tackling climate change; last year, it invested nearly €50 billion in clean energy projects, compared to the US figure of €27 billion, and cut the “carbon intensity” of its economy by 5 per cent.

Internationally, however, things are moving more slowly. Fossil fuels still benefit from subsidies worth €1,460 billion, according to the IMF – which wants to see them phased out – while agreement has yet to be reached on how to deal with emissions from aviation and shipping.

The ad hoc working group on the Durban Platform for Enhanced Action on Climate Change will hold a further round of talks in Bonn next month to prepare for the UN’s annual climate conference, at Warsaw in November.

And starting tomorrow, German environment minister Peter Altmaier and his Polish counterpart, Marcin Korolec, will jointly host the fourth Petersberg Climate Dialogue in Berlin, involving a representative group of 35 of their colleagues from all regions of the world.

But whether all, or any, of this talking will lead anywhere is an open question.