Britain’s options are limited, complicated by its status as playground for Russian oligarchs 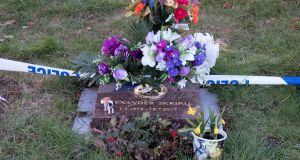 The memorial for Alexander Skripal, son of former Russian double agent Sergei Skripal, in Salisbury on March 8th, 2018 in Wiltshire, England. Sergei Skripal and his daughter remain critically ill after being exposed to an “unknown substance”. Photograph: Matt Cardy/Getty Images

As military personnel join police in investigating the poisoning of Sergei Skripal and his daughter Yulia, British ministers continue to insist that it is too early to point the finger of blame. If evidence emerges that the Russian state was responsible, however, the government will be under pressure to take retaliatory action.

That contamination of police sergeant Nick Bailey, who was one of the first to arrive at the scene in Salisbury on Sunday, will intensify that pressure. But Britain’s options are limited, and complicated by the contradiction between the government’s hawkish official stance towards Vladimir Putin and London’s status as a playground for Russian oligarchs and a laundromat for their wealth.

Britain’s weak and sluggish response to the murder of Alexander Litvinenko in London in 2006, which a public inquiry said was authorised by the Kremlin, may have emboldened Moscow. MPs this week called on the government to reopen investigations into the suspicious deaths of 14 other Russians in Britain since 2012.

When Boris Berezovsky, an oligarch who fell out with Putin, was found hanged in 2013, the coroner returned an open verdict. A year earlier, Alexander Perepilichnyy, a former banker who blew the whistle on Russian money laundering, had traces of a poisonous chemical in his stomach when he collapsed and died.

One Putin critic died in a helicopter crash after he warned his family that his sudden death would not be an accident and another was found impaled on the railings outside his central London home after he fell from a window.

Boris Johnson blustered about boycotting the World Cup in Russia this year, before clarifying that it was the officials in blazers rather than the England football team who would stay at home. If Russia is found responsible, it can expect some of its diplomats to be expelled, a move that will trigger an equivalent expulsion of British diplomats from Moscow.

Neither of these steps will hit Putin and his circle where it truly hurts, but Britain has other measures at its disposal if it chooses to use them. Since last month, British authorities have been able to impose Unexplained Wealth Orders (UWOs) on individuals who are unable to explain the source of their wealth.

It is a system similar to Ireland’s Criminal Assets Bureau, but its success will depend on the resources deployed behind it and the political will to prioritise the crackdown on corruption over the profits of London’s army of lawyers, accountants and bankers who take care of wealthy Russians and their dubious cash.