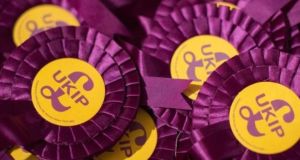 The UK Independence Party said it has expelled MEP Janice Atkinson over what it called “allegations of a serious financial nature,” the BBC reported.

Ukip said it has also expelled her chief of staff Christine Hewitt and both women have 14 days to appeal the decision, BBC reported.

Ms Atkinson said she was “deeply disappointed” by the decision and would appeal, BBC said.

“I was elected to represent the constituents of the southeast of England and I will continue to work tirelessly on their behalf and for the best interests of our country,” Ms Atkinson said in statement to the BBC.

Representatives at Ms Atkinson’s office and UKIP were not immediately available for comment.

On Friday, the party suspended Ms Atkinson weeks before the May 7th vote, after the Sun newspaper released a secretly filmed video, which it said showed Atkinson’s chief of staff asking for a falsely inflated invoice for a restaurant meal that she intended to claim back from an EU parliamentary group.

Shortly afterwards, Ukip said it had suspended a second party member over an unrelated workplace incident. A Ukip statement said it was conducting an investigation into Stephen Howd, who had been due to stand for election in northern England.

Ukip’s rapid rise in popularity may cost prime minister David Cameron’s Conservatives an outright victory, and the party hopes to use the election to advance its campaign to get Britain to leave the European Union

Ms Atkinson was considered to be one of Ukip’s higher-profile candidates.