UK politics plays out in ‘miserable’ Essex borough of Thurrock

Ukip’s success in Thurrock has focused attention of other parties 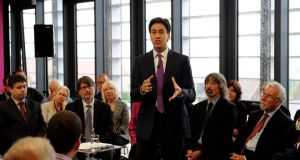 A few years ago Thurrock in Essex received the unfortunate tag of being the most miserable place in Britain to live in – a moniker it has struggled to disown.

In 2010, the Conservatives won the town’s House of Commons seat by the narrowest of margins over Labour, which had held the seat three times under Tony Blair.

Next year, Thurrock is Labour’s number-two target seat – one that will have to fall Ed Miliband’s way if he is to oust David Cameron from Downing Street.

Last Thursday, however, the UK Independence Party got 39 per cent of votes for Thurrock Council – taking three seats from the Conservatives and two from Labour, who lost control of the council.

Now, Thurrock is one of the 20 or so seats that will be targeted over the next year by Ukip, who have already selected its policy director, Tim Aker – though the fruits of his policy work have yet to be seen – as its candidate.

Miliband went to Thurrock yesterday, the start of a journey, that will have to take in many places like it that feel disenfranchised and ignored, over the next year.

Anti-Europe pressure Some in Labour wanted to hear a Eurosceptic tone from Miliband, believing that Labour must match Cameron’s pledge to hold an EU membership referendum in the next parliament.

For now, Miliband issues soft noises to the disgruntled, saying that he understands concerns about “builders from Eastern Europe (or) care-workers from overseas who sometimes don’t speak fluent English”.

Such “realities” are visible not just in Thurrock but elsewhere he went on: “One person said: ‘The ordinary man in the street is not being heard enough.’ They thought Ukip heard them.”

Equally, he said he accepted that many blame Labour – for permitting restriction-free Eastern European migration after 2004 or for not “standing up for working people”.

However, Miliband is not prepared to concede ground on core points – particularly on a referendum which he believes should be held only after the next EU treaty, if there is one.

“We know what [Ukip’s] appeal is. They provide a simple explanation of the cause of our country’s problems: Europe and foreigners. And they have an apparently simple solution: to get out of the European Union.

“This is not the answer for our country, this will never be Labour’s mission or policy under my leadership,” declared Miliband in words that will not have met with a unanimous approval.

For now, Ukip enjoys that most precious political resource: momentum. A byelection in Newark in Nottinghamshire on June 5th offers the possibility of an even more significant gain.

Pact ruled out In Newark last week more people voted Ukip than Conservative, but the 16,000 majority enjoyed by Conservative MP, Patrick Mercer, who resigned over cash-for-questions allegations, is a huge challenge.

One detailed analysis found that just half of those who voted Ukip in the European and local elections intend to do so again in next year’s general election.

So far, the Conservatives in Newark remain cautiously optimistic and Ukip issues enthusiastic noises, but no more: the question is whether voters have developed a taste for Nigel Farage’s recipe now that they’ve seen he can win.

As Miliband has refused to heed his Eurosceptics, Cameron has decided not to concede more ground to those in his ranks, by ruling out coalition pacts with Farage and by refusing to hold his membership referendum a year early.

However, he will use the Ukip result as leverage in Brussels talks with fellow European leaders, in a bid to persuade them that his demands for reforms should be heard, before there is a clamour for greater change.

The issue is whether the actions of either Cameron or Miliband will be heard by Ukip voters. The Conservatives believe those who deserted them can be brought back, if reluctantly, by the EU referendum pledge.

It is not clear how Miliband’s strategy deals with his disaffected. His hope will be that, faced with voting Ukip or another five years of Conservative rule, they can be brought back onside.

Such arguments are far from guaranteeing success. But gambles have worked before, even in Thurrock. Five years ago, the Royal Opera House began to build all of its sets on a 14-acre plot in the area. The idea that a British cultural icon, particularly one regarded as a symbol of the metropolitan elite, would move to darkest Essex was mocked. Today, it is thriving. Difficult flowers can flourish in hard-to-grow places.