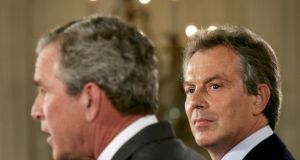 British prime minister Tony Blair looks at US president George W Bush at a joint news conference in the East Room of the White House in the US on June 7th, 2005. File photograph: Jason Reed/Reuters

An emotional Tony Blair has defended his decision to invade Iraq in 2003, after a damning official report said he went to war on the basis of faulty intelligence before peaceful options had been exhausted.

During a press conference lasting almost two hours, Mr Blair appeared anguished as he expressed “sorrow, regret and apology” for failures in Iraq but said he was right to overthrow Saddam Hussein.

“If I was back in the same place, with the same information, I would take the same decision because obviously that was the decision I believe was right,” he said.

“All I’m saying today, because obviously some of the intelligence has turned out to be wrong, the planning wasn’t done properly, I have to accept those criticisms, I accept responsibility for them.”

Labour leader Jeremy Corbyn apologised on behalf of his party for what he called the “disastrous” decision to go to war, saying millions of British citizens felt their democracy was traduced and undermined by the way it was taken.

“The decision to go to war in Iraq has been a stain on our party and our country,” he said.

Sir John Chilcot’s report, which followed a seven-year inquiry and runs to more than 6,000 pages, is devastating in its criticism of Mr Blair and of Britain’s intelligence and military leaders.

It includes fresh evidence that Mr Blair made a commitment to support then US president George W Bush’s drive for regime change long before the prime minister publicly backed military action.

Sir John says that Mr Blair made the commitment without consulting cabinet colleagues, and only a handful of advisers saw the message before he sent it.

The report says the message represented “an extensive statement of the UK government’s position by the prime minister” to the president of the US.

“The foreign and defence secretaries should certainly have been given an opportunity to comment on the draft in advance,” it says.

The report accuses Mr Blair of undermining the UN security council and says the military planning for the invasion and its aftermath was inadequate, leaving soldiers poorly equipped for their mission.

It criticises intelligence chiefs for failing to make clear their intelligence had not established beyond doubt that Iraq had weapons of mass destruction and failing to consider the possibility that it might not.

Mr Blair acknowledged that the report was critical of him but he claimed it showed he had not misled MPs or falsified intelligence and that he had acted in good faith.

“A decision had to be taken and it was for me to take as prime minister. I took it, I accept full responsibility for it, I stand by it,” he said.

“I only ask with humility that the British people accept that I took this decision because I believed that it was the right thing to do based on the information that I had and the threat I perceived, and that my duty as prime minister at that moment in time was to do what I thought was right.”