Shorn of his wingman, Boris surprises with brexit stage left

Michael Gove, fresh from destroying his friend David Cameron, goes for the accumulator 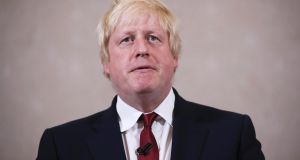 Boris Johnson during Thursday’s press conference in which he ruled himself out of the running to be the next Conservative Party leader. His surprise non-running speech played much on the need for unity, for uniting those who came from opposing sides. Photograph: Dan Kitwood/Getty Images

Here comes Boris Johnson, half an hour before deadline closes. He’s going to chuck his hat in the ring like Blackadder’s Lord Flashheart, isn’t he? “I’ve got a plan, and it’s as hot as my pants!”

Except he isn’t. Standing at a podium bearing not a soaring campaign slogan, but the rather more prosaic “ST ERMIN’S HOTEL”, the leading political bounder of the age announced that he thought about the individual needed to take the country out of the mess he’s dumped it in (I paraphrase), and “concluded that person cannot be me”.

Where did it all go right? Normally Boris is so smart he doesn’t even fly by the seat of his own pants. Unfortunately for him, his wingman recently decided he isn’t willing to offer up his undergarments any longer.

Michael Gove, fresh from destroying his friend David Cameron, is going for the accumulator by announcing his surprise Tory leadership bid. As Gove put it this morning: “I have come, reluctantly, to the conclusion that Boris cannot provide the leadership or build the team for the task ahead.” It sounds like a tragic conflict of disloyalties, with which Michael has wrestled for perhaps 24 hours.

Even before Boris took to his hotel podium, you could hear the offstage crash of defections to Gove. Dominic Raab was now off, having literally written a piece for this morning’s Sun headlined: Why Boris Has the Heineken Effect. To which the only rejoinder can be: If Carlsberg Did Political U-turns . . .

Even so, and however inevitable it might feel after some reflection, this was a shock. We did know a schism might be on the House of Cards, as it were, thanks to yesterday’s accidentally leaked email from Gove’s wife Sarah Vine. Think of her as Claire Blunderwood. The pisser for Boris is that he now can’t even contemplate having Michael beaten up, like he did that troublesome little journalist back in the day, because many people have one eye on the news at the mo and would probably notice.

Perhaps there were other signs of uncertainty. Friends of Boris have spent much of the week briefing that his “private polling” shows he is “the only Tory leadership candidate with enough public support to ensure the Conservatives win the next general election”.

So we will now not discover how much of a #massivelegend Boris is outside his London and Home Counties heartlands. Quite how he’d go over in Sunderland in the event of Hitachi pulling out of the area, for example, must remain a known unknown.

His surprise non-running speech played much on the need for unity, for uniting those who came from opposing sides. I don’t know if you’ve read Team of Rivals, but try and picture it with Boris Johnson in the chair instead of Abraham Lincoln. Gove’s statement could scarcely have been more pointed about Johnson’s weakness in this area: “I respect and admire all the candidates running for the leadership. In particular, I wanted to help build a team behind Boris Johnson so that a politician who argued for leaving the European Union could lead us to a better future. But . . .” Cos you know Michael loves the players. And Boris loves the game.

Reading the writing on the wall, perhaps the former London mayor decided he was damned if he was going to play Monopoly to settle for the Community Chest reading: “You have won second prize in a beauty contest.” It remains to be seen how his public – all those wonderful people out there in the dark as to his real nature – will take Johnson’s decision.

Where does this leave them? On spying Baldrick, Lord Flashheart declares: “You look like a decent British bloke. I’ll park the old booties on you if that’s Okay.” “It would be an honour, my Lord,” replies Baldrick.

Hard lines for Britain, then, which will now not be offered the golden opportunity to be Boris Johnson’s bootrest.