Senior figures in North back talks with dissident republicans 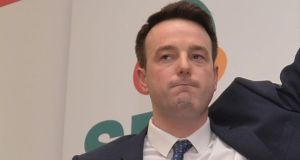 SDLP leader Colum Eastwood: “The dissidents have to be made to understand that it is today’s Irish people, North and South, who stand in their way. In reality their fight is with us, not the British government.” Photograph: Colm Lenaghan/Pacemaker Press

Newly elected SDLP leader Colum Eastwood and a former senior Catholic PSNI officer have told The Irish Times they would talk to dissident republicans in an effort to save lives. “I would go anywhere and speak to anyone if I thought it would save one life,” Mr Eastwood said in a week when a number of republican dissident groups threatened further attacks.

Peter Sheridan, a former assistant chief constable and the highest-ranked Catholic in the history of the force, has also said a dialogue with dissidents to end violence would be “a risk worth taking”.

Now chief executive of peace-building organisation Co-operation Ireland, Mr Sheridan said: “Those engaged in extreme violence have to be made to realise that their aims are unattainable by violent means.”

Calling for “a collective effort” by Catholic, nationalist and republican leaders, he added: “We need to avoid a strategy that is built on cliche and sweeping generalisations, a strategy that simply takes the view that ‘it’s good to talk’. If dissidents aren’t willing to talk, then it raises the question: is it only killing for killing’s sake?” Mr Sheridan was speaking in the wake of the murder of prison officer Adrian Ismay, who died after a car-bomb attack.

The threat posed by dissident groups continues to be assessed as severe. The SDLP leader said: “If Irish history shows us anything, it’s that a security response alone won’t work. That means we have to constantly take on and confront the ideals and ideas that fuel their continued existence.

“That is particularly important for those of us who are Irish nationalists, from the Irish Government, leaders of political parties, right down to street level. The dissidents have to be made to understand that it is today’s Irish people, North and South, who stand in their way. In reality their fight is with us, not the British government.”

The PSNI believes there are several hundred “active” dissidents across the groups using the IRA, Continuity IRA and Óglaigh na hÉireann titles. Intelligence assessments point to those being directed by a small group of people with “significant terrorist experience”.

For every attack that gets through, the PSNI is stopping three or four. However, PSNI assistant chief constable Will Kerr has said the threat is nowhere equal to the one posed by the IRA from the 1970s to the 1990s. However, the PSNI believes dissidents are planning more attacks on police officers, soldiers and prison officers, particularly when off duty.

Róisín McGlone, an independent member of the Northern Ireland Policing Board, believes the possibility of talks should be explored. “If it is about stopping violence and killing why would we not try? . . . What have we to lose from doing that?” Ms McGlone asked.