Importance of issue, closeness of contest, and level of interest motivated voters 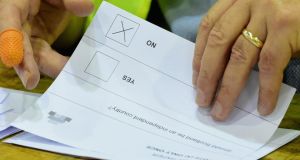 A cross marks a No vote on a ballot paper at the count centre for the Scottish referendum at Ingleston Hall in Edinburgh. Photograph: Getty

The turnout of over 85 per cent in the Scottish referendum was phenomenal, higher than the turnout in any election or plebiscite since the introduction of universal suffrage in Britain.

The previous highest tally was in the general election of 1950 in Britain where overall turnout was 84 per cent. In that 1950 election, the vote in Scotland was marginally lower, at just under 81 per cent.

In more recent electoral history turnout in Scotland has struggled to get above 60 per cent.

A referendum on devolution in 1979 saw a turnout of 63 per cent. In the last Scottish parliament elections only half of the valid electorate voted.

A number of reasons were posited why the turnout was so high by political scientists and commentators today. The first was the profound significance of the referendum, which was essentially offering a choice to retain a 307 year old union, or to ditch it in favour of independence.

The next was the clear cut choice that was offered, a binary option of voting Yes or No for outcomes that were also clear. The third was the impact that the rapidly closing gap in opinion polls had on Scottish citizens.

The sudden realisation that a comfortable victory for the No side was no longer certain had an electric impact, galvanising both camps to ratchet up their campaigns substantially. That impacted on the population as did the reality that with No no longer a foregone conclusion, the votes at the margins could potentially become important.

The final reason was the manner in which the referendum - and the debate of Scotland’s status - not only captured the attention of its own electorate but the almost undivided attention of a wider world. That was illustrated by the three political party leaders ditching Westminster to travel to Scotland, Gordon Brown’s dramatic interventions and David Cameron’s extraordinary (but effective) speech in which he acknowledged his own political fallibility but urged Scots to think beyond when a Tory government was in power.

Those factors - the importance of the issue, the closeness of the contest, and the level of public interest - do not all need to be present, but they play a part. That is illustrated in Irish referendums over years where turnout has been high when the matter has been considered substantial or where the outcome has hung in the balance. The highest turnout for a referendum in Ireland was 75.8 per cent for de Valera’s constitution in 1937. Similarly, another important constitutional change in 1971, (the prospect of joining the European Economic Community) attracted a turnout of over 70 per cent.

The lowest in the State was in 1979 for the change that allowed wider franchise for the university seats in the Seanad.

The turnout for the second Nice and Lisbon treaties was much higher than that for the first polls, a symptom of larger public awareness campaigns and higher awareness of the gravity of the issues.

By contrast, only 39 per cent of voters turned out for the Seanad referendum in 2013, an indication of its relative unimportance for a large swathe of the electorate.

The highest turnout in the North was, unsurprisingly, for the referendum in 1998 that gave effect to the Good Friday Agreement. Some 81.1 per cent of the population voted in that poll.

Another interesting aspect of the Scottish referendum was the franchise was extended to those aged 16 and 17. This is important in the context of this State as the Constitutional Convention recommended that teenagers between 16 and 18 be allowed vote in Ireland. The matter is likely to be put to referendum within the next year.

There were divided views in the British and Scottish media today about the impact of this teenage vote, whether or not it skewed the result one way of the other. Some 110,000 of the 4.2m voters were in this age bracket, which is only 2.3 per cent of the electorate.

It is clear the impact was limited, with an indication that turnout in this group was lower than that of the population. There was no conclusive survey carried out among this age group although some surveys suggested that there was no clear advantage to either the Yes or No camps to this cohort being included.