Britain's Prince Andrew denied that he sweated heavily during an alleged night out with 17 year-old Virginia Roberts in 2001 as he didn't sweat at the time due to an "overdose of adrenaline in the Falklands War ". Video: BBC 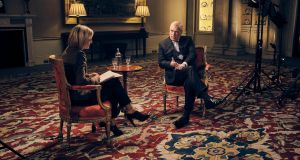 Britain’s Prince Andrew speaking for the first time about his links to Jeffrey Epstein in an interview with BBC Newsnight’s Emily Maitlis. Photograph: PA Photo.

Britain’s Prince Andrew has said his private life as a senior royal during the Jeffrey Epstein scandal did not involve sweating, drinking or dressing casually in London.

Here are some of his responses in an interview with BBC Newsnight presenter Emily Maitlis aired on Saturday night about his links with Jeffrey Epstein, his friend and convicted sex offender.

- On the allegation he met 17 year-old Virginia Roberts in 2001 and they ate, drank, went to Tramp Nightclub and later had sex. “It didn’t happen.”

He added: “I am not one to, as it were, hug and public displays of affection are not something that I do. So that’s the best explanation I can give you and I’m afraid to say that I don’t believe that photograph was taken in the way that has been suggested.”

- On whether he remembers dancing at Tramp nightclub. “I was with the children and I’d taken Beatrice to a Pizza Express in Woking for a party at I suppose, sort of, four or five in the afternoon.”

- On the claim that he sweated heavily during an alleged night out with Ms Roberts. “I didn’t sweat at the time because I had suffered what I would describe as an overdose of adrenaline in the Falklands War when I was shot at and I simply...it was almost impossible for me to sweat.”

- On whether he now has any sense of guilt, regret or shame about any of his behaviour and/or friendship with Epstein. “As far as Mr Epstein was concerned, it was the wrong decision to go and see him in 2010. As far as my association with him was concerned, it had some seriously beneficial outcomes in areas that have nothing to do with what I would describe as what we’re talking about today.”

“I stayed with him and that’s the bit, as it were, I kick myself for on a daily basis because it was not something that was becoming of a member of the royal family and we try and uphold the highest standards and practices and I let the side down, simple as that.”

- On why he stayed at the house of a convicted sex offender. “It was a convenient place to stay. I mean I’ve gone through this in my mind so many times. At the end of the day, with a benefit of all the hindsight that one can have, it was definitely the wrong thing to do.

“But at the time I felt it was the honourable and right thing to do and I admit fully that my judgment was probably coloured by my tendency to be too honourable but that’s just the way it is.”

- On whether he had sex with Ms Roberts or any young woman trafficked by Epstein. “No and without putting too fine a point on it, if you’re a man it is a positive act to have sex with somebody. You have to have to take some sort of positive action and so therefore if you try to forget it’s very difficult to try and forget a positive action and I do not remember anything.”

- Would he be willing to testify or give a statement under oath. “Well I’m like everybody else and I will have to take all the legal advice that there was before I was to do that sort of thing. But if push came to shove and the legal advice was to do so, then I would be duty bound to do so.” –PA