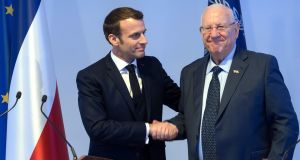 World leaders heading high-level delegations from 49 countries are in Israel for the Fifth World Holocaust Forum, commemorating 75 years since the 1945 liberation of the Auschwitz death camp.

The two-day gathering got under way on Wednesday night when President Reuven Rivlin hosted state leaders at a dinner at the presidential residence in Jerusalem, although some of the guests, including Russian president Vladimir Putin and US vice-president Mike Pence, are arriving on Thursday morning.

Mr Rivlin said the purpose of the gathering is “to think about how to pass on Holocaust remembrance to generations who will live in a world without survivors, and what steps we must take to ensure the safety and security of Jews, all around the world”.

Israel, which was expecting a dozen or so dignitaries to attend, was overwhelmed by the global response as the gathering mushroomed into the biggest diplomatic event in the country’s history, surpassing the funerals of former prime ministers Yitzhak Rabin and Shimon Peres.

The event, which includes political meetings between world and Israeli leaders where discussions are focusing on the latest Iran tensions and efforts to revive the Middle East peace process, will culminate on Thursday with a ceremony at the Yad Vashem Holocaust memorial and museum.

In an embarrassing incident for Israel on Wednesday afternoon, French president Emmanuel Macron shouted at Israeli security agents who followed him into the Church of St Anne in Jerusalem’s Old City – French territory, where Israel does not have jurisdiction.

“Everyone knows the procedures. I don’t like what you did. Now get out of here,” Mr Macron said, visibly angry.

Earlier, at a meeting with Mr Rivlin, Mr Macron said he was “committed and active” in the fight against anti-Semitism.

“Anti-Zionism is not different from anti-Semitism,” he added. “We can disagree . . . but there is no doubt that today, denying the right of the state of Israel to exist is a modern version of anti-Semitism.”

“Like other democracies, Israel is open to criticism, but we will not allow our right to exist as a Jewish and democratic state in our homeland to be undermined,” Mr Rivlin stated.

Polish president Andrzej Duda boycotted the event because Russian president Mr Putin was invited to speak and he wasn’t. Mr Duda said he was unwilling to listen to Mr Putin – who rejects Polish criticism of the Hitler-Stalin pact – without being given the opportunity to respond.

Much of the focus in the Israeli media has been on a gesture expected to be announced on Thursday by Mr Putin when he meets the mother of an Israeli backpacker who was sentenced to a seven-year jail term after being caught in Moscow airport last year in possession of marijuana.

In return for the girl’s release, Israel will hand over ownership of church property in Jerusalem’s Old City to the Russian government.

Mr Putin will also inaugurate a memorial in honour of the victims of the siege of Leningrad at Jerusalem’s Sacher Park.