One person still missing after fishing vessel sinks off Scotland

Bodies of two crew members recovered, with one person rescued and in hospital 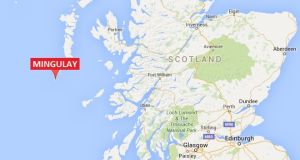 A fishing vessel has sunk off the Western Isles in Scotland, with one of the four crew members still missing.

The bodies of two crew members have been found, with another person in hospital.

“The UK Coastguard received a distress alert just before 3.45 this morning when the fishing vessel’s emergency positioning beacon (EPIRB) was activated near Mingulay,” she said. “The coastguard search and rescue helicopter based at Stornoway has been searching the area along with the Barra RNLI lifeboat.

“One crew member has been taken to hospital by the helicopter. The lifeboat remains in the area and the coastguard search and rescue helicopter from Prestwick has taken over so the search can continue.”