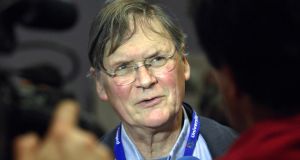 Scientist Tim Hunt told the conference he had a reputation for being a chauvinist. File photograph: AFP/Getty Images

A Nobel laureate has resigned as a professor at a London university after saying women scientists should work in segregated laboratories.

Sir Tim Hunt (72), was reported to have told a delegates at a conference in Seoul, South Korea, on Monday: “Let me tell you about my trouble with girls. Three things happen when they are in the lab: you fall in love with them, they fall in love with you and when you criticise them, they cry.”

Mr Hunt, who won the Nobel Prize for Physiology or Medicine in 2001, also told the conference he had a reputation for being a chauvinist.

He apologised on Wednesday saying he was being honest and had meant his comments to be light-hearted.

“Tim Hunt has today resigned from his position as Honorary Professor with the UCL Faculty of Life Sciences, following comments he made about women in science at the World Conference of Science Journalists on 9 June,” University College London said in a statement on Wednesday.

“UCL was the first university in England to admit women students on equal terms to men, and the university believes that this outcome is compatible with our commitment to gender equality.”

The Royal Society, of which Mr Hunt has been a fellow since 1991, has already distanced itself from the comments, which sparked a backlash online.

Speaking to the BBC yesterday, Mr Hunt insisted his remarks were intended to be funny, but reflected that it had been a “very stupid thing to do” in the presence of many journalists.

“I found that these emotional entanglements made life very difficult.

“I’m really, really sorry I caused any offence, that’s awful. I certainly didn’t mean that. I just meant to be honest, actually.”

Defending his remarks, he added: “It’s terribly important that you can criticise people’s ideas without criticising them and if they burst into tears, it means that you tend to hold back from getting at the absolute truth. Science is about nothing but getting at the truth and anything that gets in the way of that diminishes, in my experience, the science.”

Connie St Louis, a lecturer in science journalism at City University, was in the audience when Mr Hunt made the remarks and described the experience as “awful”, adding that his comments were greeted with silence.

“A lot of my colleagues sat down and were taking notes because they couldn’t believe in this day and age that somebody would be prepared to stand up and be so crass, so rude in a different culture and actually to be so openly sexist as well.”