Labour remains largest party on 29 seats, with Plaid Cymru in second place on 12 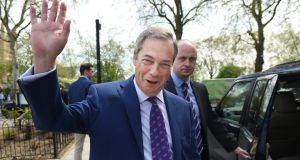 The UK Independence Party (Ukip) emerged as the biggest winner from elections to the Welsh Assembly, demonstrating a growing Eurosceptic mood in the principality just seven weeks before Britain votes on whether to stay in the European Union.

Ukip won seven of the 60 seats in the Cardiff legislature in Thursday’s voting, compared with none in the previous election in 2011. It took 13 per cent of the vote, up from less than 5 per cent five years ago.

While polls indicate big majorities in Scotland and Northern Ireland for staying in the EU, opinion in Wales, as in England, is far more divided.

“I am delighted at the significant breakthrough Ukip has made in Wales,” the party’s leader, Nigel Farage, said in an emailed statement, adding that Ukip now had a “large voice in Wales to campaign for Brexit”.

Britain’s Labour Party, which has run the semi-autonomous Welsh government since its inception in 1999, lost support but retained most of its seats, winning 29 – just short of a majority.

That was two seats more than the final pre-election poll had projected, allowing it to avoid the need for a coalition.

“It’s important to recognise that, with 29, you can have a minority government,” Edwina Hart, who was a minister in the Labour Welsh government before the election, told the BBC. “You are able to govern as long as you get agreement on certain key issues.”

The nationalist party, Plaid Cymru, saw its support increase and it overtook the Conservatives to become the second-largest in the assembly with 12 seats, an increase of one. Plaid Cymru leader Leanne Wood won the Rhondda district seat in south Wales from the Labour Party.

Among those successful for Ukip was former Tory MP Neil Hamilton, who lost his Westminster seat in 1997 after becoming embroiled in the cash-for-questions affair.

Mr Hamilton confirmed that his candidacy had been opposed by Ukip leader Nigel Farage.“Well, there’s no secret about that, but Nigel is a democrat and I was selected by the overwhelming vote of the party members in Wales for a winnable place on the Assembly list,” he told the BBC.

“We will all work together as a team regardless of things that have divided us hitherto. This is nothing new in politics . . . I was a member of John Major’s government that tore itself to pieces over Europe. I was a member of Margaret Thatcher’s government, and we had all sorts of divisions in that, but ultimately you have to get on with your colleagues and make a success of public life.”

The ex-MP will now represent the constituency of Mid and West Wales, 19 years after he was defeated by Independent Martin Bell in one of the most talked-about showdowns of the 1997 Westminster elections.