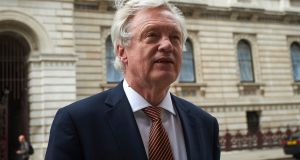 British secretary of state for exiting the European Union (Brexit minister) David Davis: His appointment, in conjunction with those of Boris Johnson as foreign minister and Liam Fox in trade, led Angus Robertson, leader of the Scottish National Party at Westminster, to descibe the cabinet as one of the most right-wing in the modern era. Photograph: Niklas Halle’n/AFP/Getty Images

Theresa May has transformed the British cabinet, putting all but a handful of ministries under new leadership and sacking some of the most powerful figures in David Cameron’s government.

The prime minister’s official spokeswoman said it was a “bold” government which was ready to hit the ground running. And she pointed to some of yesterday’s appointments as evidence of a shift in focus.

“What we’re seeing is the commitment of the prime minister to putting social reform at the heart of her government,” the spokesman said.

Ms May started the day at her office at the House of Commons, where she sacked outgoing ministers face to face, before returning to Downing Street to make new appointments.

Outgoing work and pensions secretary Stephen Crabb, a devout Christian who was caught sending lewd texts to a woman who was not his wife, said he was leaving the government in the interests of his family. And former Northern Ireland secretary Theresa Villiers was offered a position but turned it down.

Although Ms May has stressed her commitment to social justice and a more interventionist economic policy, many of her appointments are drawn from the right of the Conservative Party. Angus Robertson, leader of the Scottish National Party at Westminster, said it was one of the most right-wing cabinets in the modern era.

“From Boris Johnson as our foreign secretary – a man who will now be representing us on the world stage – to David Davis as Brexit minister and Liam Fox for trade, it will be Brexiteers who are taking forward UK foreign policy,” he said.

“We also have Jeremy Hunt being reappointed as health secretary, despite the ongoing disputes with junior doctors . . .”

Ms May spoke on the phone for 15 minutes with US president Barack Obama, who congratulated her on her appointment and spoke of the continued importance of the special relationship between the two countries. Her appointment of Mr Johnson as foreign secretary, which has gone down badly in Washington, was not mentioned.

As Westminster digested the scale of Ms May’s changes, she received praise for her ruthlessness from former Conservative foreign secretary Malcolm Rifkind. “She has not only got a strategy to balance the Leave and Remain sides, she is trying to eliminate these distinctions because we are all now aiming for the same objective.”

“But she has appointed with a ruthlessness that has been impressive to look at,” he said.

1 Harry and Meghan will no longer be working members of British royal family
2 Campaigning continues as poll puts Fianna Fáil 12 points ahead of Fine Gael
3 Mary Lou has to call for the smelling salts as SF councillor deals a knock-out blow
4 Who was murdered teenager Keane Mulready-Woods?
5 Dublin gangland figures involved in Drogheda feud that killed 17-year-old
Real news has value SUBSCRIBE