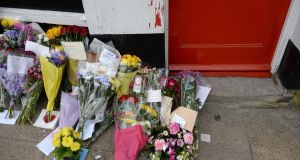 Flowers are left outside the constituency office of slain Labour MP Jo Cox, who was murdered in the village of Birstall, in Batley northern England. Photograph: Oli Scarff/AFP/Getty Images

Murdered MP Jo Cox was a “21st century Good Samaritan”, churchgoers have been told in the West Yorkshire village where she was killed.

The Rev Paul Knight told a congregation at St Peter’s Church in Birstall that the 41-year-old Labour Party MP was “someone with whom Jesus would have been so pleased”.

“Her humanity was powerful and compelling and we would do well to recognise her as an amazing example — a 21st century Good Samaritan.”

Rev Knight said: “Jo was someone who went out of her way to help others.

“I regret to say I didn’t know what she was like as a girl but she grew into a fervent advocate for the poor and oppressed.

“And though she must have been angry at times about what she saw here and around the world — those places she visited and worked — she seemed to me, at least, to be one who could fight with a passion and a disarming smile.”

The man charged with murdering Ms Cox declared ”death to traitors, freedom for Britain” when asked to give his name during his first court appearance on Saturday.

Thomas Mair (52), is charged with murder, grievous bodily harm, possession of a firearm with intent to commit an indictable offence and possession of an offensive weapon.

Mr Mair, who was wearing a grey tracksuit and black shoes, did not give his correct name in court and then remained silent when asked for his address and date of birth.

Mr Mair was not required to enter a plea at court and his lawyer Keith Allen said there was no indication of what plea would be given. He also told the court that legal aid has been applied for.

Deputy Chief Magistrate Emma Arbuthnot ordered that he be remanded in custody until his next appearance, a bail application at the Old Bailey on Monday. He will be held at Belmarsh Prison, and Ms Arbuthnot suggested that a psychiatric report should be prepared, saying: “Bearing in mind the name he has just given, he ought to be seen by a psychiatrist.”

Prayers were said at St Peter’s for Mr Cox and the couple’s two young children.

Rev Knight also remembered the bravery of pensioner Bernard Kenny (77), who remains in hospital after he was injured coming to Mrs Cox’s aid outside Birstall library on Thursday.

After reading the story of the Good Samaritan from the Bible, the vicar said: “There is much wickedness in our world. But thank God there is so much goodness - goodness that does not recognise colour, not nationality.”

Rev Knight was speaking as Mrs Cox’s husband Brendan tweeted: “Jo loved camping. Last night the kids & I camped in her memory& remembered the last time we were all woken by the dawn chorus #MoreInCommon”

The memorial service comes after Mrs Cox’s sister called for people to show “strength and solidarity” in the wake of her death Kim Leadbeater told crowds gathered in Birstall on Saturday that they should “focus on that which unites us and not which divides us” as part of her sister’s legacy.

Ms Leadbeater, parents Gordon and Jean Leadbeater, and other family members viewed the hundreds of floral tributes and messages left to the Batley and Spen MP since her death on Thursday.

They embraced as they looked at the flowers in Birstall marketplace, metres away from where she was shot and stabbed in the street outside her constituency surgery. A memorial fund to raise money for charities Mrs Cox supported has reached more than £620,000, with donations from over 20,000 people.