Baby, who is fourth in line to the British throne was born on Saturday morning weighing 8lbs 3 oz

Britain’s Duchess of Cambridge, the wife of Prince William, gave birth to a daughter on Saturday, May 2nd. A ceremonial town crier announced the birth of the new baby from the steps of St Mary's Hospital. Video: Reuters 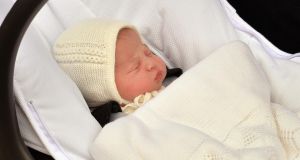 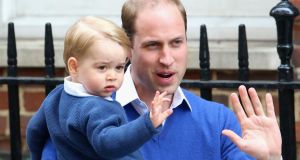 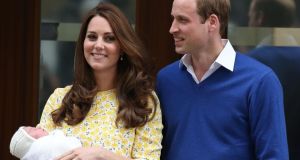 A ceremonial town crier holds a scroll after announcing the birth of a baby girl to royal fans and members of the media outside the entrance to the Lindo wing of St Mary’s Hospital in London on Saturday. Photograph: Cathal McNaughton/Reuters 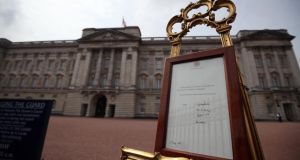 An easel is placed in the forecourt of Buckingham Palace following the announcement that Catherine, Duchess of Cambridge gave birth to a baby girl at St Mary’s Hospital in London on Saturday. Photograph: Steve Parsons - WPA Pool/Getty Images

Britain’s Duke and Duchess of Cambridge have proudly shown off their baby princess just hours after she was born.

William and Kate left hospital on Saturday evening with their daughter, who is fourth in line to the throne.

The baby - whose name has yet to be announced - was born at 8.34am weighing 8lbs 3oz, less than three hours after the couple arrived at the Lindo Wing at St Mary’s Hospital in London.

Kate cradled her daughter in her right arm and the baby, wrapped in shawl and wearing a bonnet, was fast asleep.

The Duchess smile broadly as did the Duke who had his arm around his wife and they both waved to the media and the crowds.

Kate looked relaxed and in good health despite giving birth only around 10 hours ago, and wore a yellow and white floral print Jenny Packham dress.

After spending a few minutes posing for pictures they walked back inside the Lindo Wing and soon returned with their daughter in a baby seat.

Her Royal Highness The Duchess of Cambridge was safely delivered of a daughter at 8.34am.

William carried her and the couple held hands as they walked down the Lindo Wing steps.

After the Duke placed his baby on the back seat of a Range Rover and Kate, also in a rear seat, reached over to strap her in, he drove his family away.

The toddler prince waved to the crowds when he first arrived with his father but he left for home before his parents, through a back entrance.

“I’m very happy,” William told reporters and the large crowd of royal fans, some of whom have been camping outside for day

Prince Charles and Duchess of Cornwall were “absolutely delighted” by the announcement , Clarence House has said.

A ceremonial town crier announced the birth of the new baby.

William (32) was born at the same hospital to the late Princess Diana in 1982.

Favourite names thought to be in the running include Alice, Elizabeth, Charlotte, Victoria or Diana.

#RoyalBaby was the number one global trend on Twitter for a time, with the peak occuring at 11.25am when there were over four and a half thousand tweets per minute about the baby.