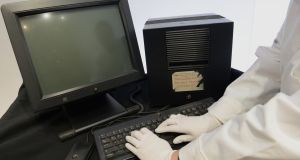 The NeXT cube, the original machine on which Sir Tim Berners-Lee designed the World Wide Web, is displayed during an event at the Science Museum to mark 25 years since he submitted the first proposal for the web on March 12th 1989. Photograph: Anthony Devlin/PA Wire

A global digital “bill of rights” similar to the Magna Carta should be introduced to protect internet users, the creator of the world wide web urged ahead of its 25th anniversary.

Sir Tim Berners-Lee said the web should be accessible to all and the principles that have made it successful defended.

He said: “The web’s billions of users are what have made it great. I hope that many of them will join me in celebrating this important milestone.

“I also hope this anniversary will spark a global conversation about our need to defend principles that have made the web successful, and to unlock the web’s untapped potential.

“I believe we can build a web that truly is for everyone: one that is accessible to all, from any device, and one that empowers all of us to achieve our dignity, rights and potential as humans,” he added.

Sir Tim told the BBC the issue of protection for web users could be compared to the importance of human rights, and called on people to take a stand against surveillance.

He said: “It’s time for us to make a big communal decision. In front of us are two roads - which way are we going to go?

Calling for increased vigilance against surveillance so people can use the internet without feeling “somebody’s looking over our shoulder”, he said: “The people of the world have to be constantly aware, constantly looking out for it — constantly making sure through action, protest, that it doesn’t happen.”

Sir Tim has given backing to an initiative called “the web we want”, urging people to create an internet users “bill of rights” for every country, which he hopes will be taken up by governments.

Jeffrey Jaffe, chief executive of the World Wide Consortium (W3C) who works with Sir Tim in his current role, said it was “amazing” how the web had transformed our lives.

“The web has transformed society — how we get information, how we interact with other human beings in terms of social networks, how we conduct business, the way we get educated and entertained has changed. All the major functions of life have been changed by the web,” Dr Jaffe said.

Although he said the web faced challenges and presented many opportunities, he warned that “technology has often moved faster than society”.

He added: “There are huge challenges in protecting people’s privacy and making the web secure. Society overall doesn’t know what it wants in terms of protection on the web (because) there are generational differences and attitudinal issues. Then there are technological issues.

“What is important to us is that the web achieves its full potential but that will only happen if people trust the web to be secure.”

Dr Jaffe said the web presented many opportunities for different industries including education, entertainment and publishing.

“Everyone can become a publisher and market their products on the web and get massive distribution.”

Sir Tim and Dr Jaffe called on users to tell the Web Foundation their dream for the web via Twitter using the hashtag, #web25.