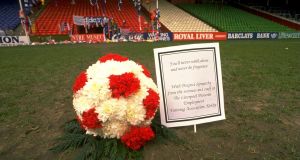 A floral football lies on the pitch in tribute after the Hillsborough disaster in 1989. Photograph: Pascal Rondeau/Allsport

The 96 fans crushed to death at Hillsborough stadium died unlawfully.

Chief Supt David Duckenfield, the police officer in charge of the match, was guilty of gross negligence.

The behaviour of Liverpool fans did not contribute to the disaster.

There were too few turnstiles for a capacity crowd.

Police caused a dangerous situation at the turnstiles.

Failures by commanding officers caused a crush on the terraces.

The police response to the increasing crowd at Leppings Lane was slow and uncoordinated.

Mistakes by the ambulance service contributed to deaths.

Sheffield Wednesday did not agree contingency plans with police, and stadium signage was inadequate.

1 Trump announces clampdown on social media companies
2 Covid-19: Two-week quarantine period for arrivals into State could be lifted for some
3 Miriam Lord: Taoiseach is trapped in a Zoom session from hell
4 All students will not return to school even if social distancing rules are relaxed – McHugh
5 New rules for arrivals to Ireland start today - what is changing?
Real news has value SUBSCRIBE