Government has been urged to demand Sellafield’s closure

A number of safety issues at the UK's Sellafield nuclear plant have been revealed in a BBC Panorama programme in which a former senior manager turned whistleblower expresses his concerns about conditions at the site. Video courtesy: BBC Panorama 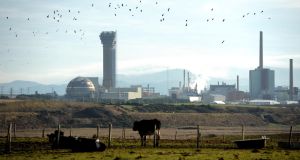 Sellafield nuclear plant: the whistleblower said his biggest fear was a fire in a nuclear waste silo or processing plant

The Government has been urged to demand the complete closure of the Sellafield nuclear site on the west coast of Britain after a BBC programme raised concerns about safety at the facility.

The Panorama investigation was prompted by a former senior manager turned whistleblower who expressed fears about conditions at the site in Cumbria which is some 170km from the Irish coast.

The programme alleged that radioactive plutonium and uranium were stored in plastic bottles at Sellafield, and the facility often did not have enough people on duty to meet minimum safety levels.

Responding to the programme, Sellafield’s head of nuclear safety, Dr Rex Strong, denied that operating below these levels was dangerous.

“You make alternative arrangements so the things that have to be done get done. Facilities are shut down if we’re not able to operate them in the way that we want to.”

The whistleblower said his biggest fear was a fire in a nuclear waste silo or processing plant. “If there is a fire there it could generate a plume of radiological waste that will go across western Europe. ”

Louth councillor Mark Dearey of the Green Party said the programme had again highlighted why Sellafield remained a source of alarm to people in Ireland.

In a statement, Minister for Energy Denis Naughten said Sellafield was “an ongoing concern” for him and the Government, and a detailed report on the matters raised in Panorama had been sought. – PA