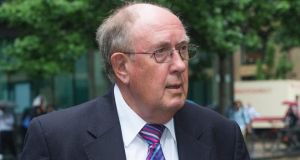 A former British UK Independence Party (Ukip) MEP, Ashley Mote, has been jailed in London for five years for a “breathtakingly dishonest” £400,000 (€560,000) fraud on his European Parliament expenses.

Mote (79) had “lied, protested, lied and lied again”, Mr Justice Stuart Smith told him as he sentenced him, telling him he would have got a seven-year sentence had he been younger.

“Your greed and dishonesty were matched only by your hypocrisy, because while this was going on you carried out a high-profile campaign condemning corruption and the improper use of public money in the very institution from which you were leeching it,” the judge said.

The then Hampshire MEP had used some of the money illegally claimed from the parliament to pay for his defence in a 2007 trial, in which he was jailed for a year for a £65,000 benefits fraud.

Saying that he had regarded the parliament as “a cash cow”, the judge said: “Along the way you deceived people who shared your declared political ideals and even considered you to be something of a political hero.”

Mote was convicted on four counts of obtaining money by deception, three of false accounting, two of fraud and three other charges for offences that had taken place between November 2004 and July 2010.

He was elected to the European Parliament in 2004 as a Ukip MEP but stood down from the party after he was released from jail after serving a year for the benefits fraud, later sitting as as independent.