Cameron has backing of most powerful countries in reform negotiations

British Prime Minister, David Cameron, has said he wants a 'better deal for Britain' as he arrives in Brussels for a two-day summit of EU heads of state. Video: EU Council 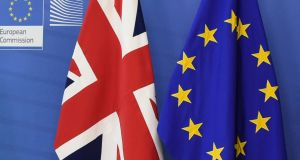 The EU and the Union flags at EU headquarters in Brussels ahead of a two-day summit to hammer out a deal designed to keep Britain in the 28-nation bloc. Photograph: AP Photo/Geert Vanden Wijngaert

David Cameron arrives in Brussels today with all but a few details of his renegotiation package already agreed and with the clear support of the most powerful voices in the room. European Council president Donald Tusk said on the eve of the summit that EU leaders have “no choice” but to do a deal. And Angela Merkel told the Bundestag that ensuring that Britain remained in the EU was in Germany’s national interest.

“These are not just about Britain’s individual interests on some issues or questions, rather it’s about several points that are justified and understandable. Like David Cameron, I believe that it is necessary for the EU to improve our competitiveness, transparency and [reduce] bureaucracy. Germany has shared these concerns for many years,” she said.

If Cameron achieves his deal by the time the summit ends tomorrow, it will be the fruit of a relentless diplomatic effort over recent months. But one of the principal reasons a deal is likely is that the British prime minister asked for so little and has been content to dilute even these modest demands.

When he first promised a referendum on Britain’s EU membership in a speech at Bloomberg in London three years ago, Cameron’s stated purpose was to achieve “fundamental, far-reaching” change in a “more flexible, more adaptable, more open” European Union. What he is looking for today is a commitment to more economic competitiveness; an opt-out for Britain from the commitment to “ever-closer union”; the right of national parliaments to halt EU legislation if 15 out of the 28 agree; safeguards to ensure that the euro zone cannot discriminate against member states which do not use the euro; and restrictions on the payment of some welfare payments to workers from other EU countries.

Still, a successful negotiation, however meagre its outcome, would take Cameron much of the way towards a confident launch to his campaign in favour of Britain remaining in the EU. He already has most of his cabinet colleagues bound to him in loyalty and with the Leave side bitterly divided, the chances of success for the prime minister in a June referendum are good.

There may be just one figure in British politics who could queer the pitch – London’s mayor Boris Johnson, who visited Cameron in Downing Street yesterday morning. Polls suggest that Johnson, who is not in the cabinet but has a higher profile than most ministers, could sway voters almost as effectively as the prime minister.

Under party rules, Conservative MPs choose two candidates in a series of ballots, leaving the final choice to the party members. If one of the successful candidates is chancellor of the exchequer George Osborne, the other is very likely to be a Leave campaigner. And a prominent role in the Leave campaign would do a candidate no harm with the Eurosceptic Conservative grassroots. Cameron hopes to persuade Johnson to back the Remain side by introducing domestic legislation that will assert the sovereignty of the British parliament in relation to the EU. That negotiation could be almost as consequential for the outcome of the referendum as anything agreed in Brussels this week.