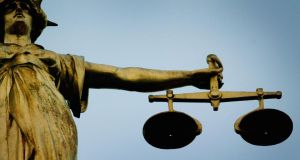 A couple who filled their home with junk were today given suspended prison sentences for child cruelty in what is thought to be the first prosecution for hoarding. Photograph: Stephen Hird/Reuters

A couple who filled their home with junk were today given suspended prison sentences for child cruelty in what is thought to be the first prosecution for hoarding.

Ambulanceman Duncan Scott, 47, and his partner Claire Anderson, 46, were told by a furious judge at the Old Bailey that they were lucky he was not jailing them immediately.

The couple, from Bedfordshire, pleaded guilty to four charges of child cruelty by providing inappropriate living condition for four children between September 2007 and September 2011.

The court heard that there were piles of clothes in the bedrooms and toys and other items from car boot sales all over the house.

Police and social workers who went to the three-bedroom terraced property found the youngsters were eating their meals on the stairs because the kitchen was so cluttered.

The children, who are all aged under 16, cannot be identified for legal reasons. Charles Ward-Jackson, prosecuting, said the house was “extremely untidy” but it was accepted that it was clean. The couple had been warned after social workers visited the house on a number of occasions, but were ignored.

Judge John Bevan observed: “He has got money problems, she seems to spend it all at car boot sales. “She shows a number of characteristics common in individuals who hoard, frequently shopping, visiting car boot sales on a weekly basis. “She seems to have spent a lot of time socialising at them in order to give her a social life.” Bozzie Sheffi, for Anderson, said she suffered from depression and was physically exhausted.

Judge Bevan sentenced the couple to six months jail suspended for two years, and ordered them to do 150 hours unpaid work each. The couple were on bail and Judge Bevan told them: “You can count yourselves fortunate that you are leaving by the same door you came in through.”

The judge said the couple appeared to blame each other. He added: “The evidence demonstrates, and one only has to look at the photographs, that you were slovenly. “The photographs are dreadful. The lower bunk bed could not appear to be seen. There was nowhere to eat food other than on the stairs.”

He told Scott: “As an ambulance technician, you should have known better.” Addressing Anderson, he said: “You were addicted to car boot sales and clutter. “The children were unkempt and untidy. Despite claiming you were suffering depression, you were not prevented from going to car boot sales and making the situation worse and worse.”