Ministers act to satisfy demand made by MPs 18 months ago 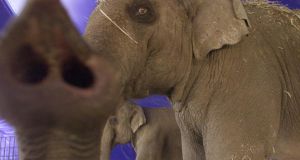 The move to ban wild animals in circuses in Britain was prompted by one owner’s mistreatment of an elephant.


Circus owners will be barred from using wild animals in their acts in Britain by December 2015, under restrictions announced yesterday.

The move was prompted by one owner’s mistreatment of an elephant but ministers had faced accusations that they were being slow in honouring promises made.

MPs had overwhelmingly backed curbs in June 2011, but the department of environment feared legal actions by circus owners.

Elephants are no longer used in British circus acts, according to the Royal Society for the Protection of Animals, but 35 wild animals, including camels, snakes and zebras, are employed.

A licensing scheme will operate between now and December 2015 but circus owners will then be required to lay out a retirement plan for no longer wanted animals.

“This grace period is to allow operators of travelling circuses a reasonable period of time to adapt their businesses and organise suitable care arrangements for their wild animals,” said junior minister David Heath.

Under the terms of the draft, wild animals in circuses Bill, which is expected to be passed quickly by parliament, the use of any creature not normally domesticated in Britain will be barred.

The RSPCA, the British Veterinary Association and the Born Free Foundation said ministers “appear to have come good on their promise. We have long argued that the complex needs of wild animals cannot be met in a travelling circus environment.”

Conservative MP Mark Pritchard, who led demands in the Commons for the change, said the restrictions were “a victory for animal welfare and common sense”.