The Chilcot report outlined the failure on the part of Britain’s political, military, intelligence and diplomatic elites in regards to the Iraq invasion. 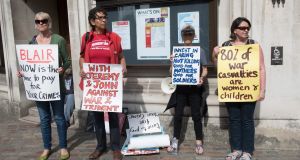 Anti-war protesters outside the Queen Elizabeth II conference centre in London ahead of the release of the Chilcot report. Photograph: EPA/Will Oliver

The UK went to war in Iraq on the basis of faulty intelligence, with inadequate planning for the invasion and its aftermath and before peaceful options to contain Saddam Hussein had been exhausted, Sir John Chilcot’s report concludes.

It does not state explicitly that the war was illegal but comes close, saying that the decision about its legal basis was made in a way that was “far from satisfactory”.

Seven years in the making and running to more than 6,000 pages, the report is damning in its criticism of Tony Blair and the UK’s intelligence and military chiefs.

It concludes that Iraq presented no imminent threat on the eve of a war that left tens of thousands dead, a million people displaced and the entire region destabilised, with deadly consequences still felt today.

US president George W Bush began to focus on toppling Saddam within days of the 9/11 attacks, which he discussed with Blair in late 2001.

Blair initially opposed a military invasion but, as a series of previously unpublished memos to Bush show, he was always open to the idea of regime change in Iraq.

As Bush assembled a coalition to attack Afghanistan, Blair said if that operation was successful and offered hope to people, “we shall have given regime change a good name which will help us in our argument over Iraq”.

A few months later, on July 28th, 2002, Blair wrote to Bush pointing out potential pitfalls of an invasion of Iraq, but left no doubt about his commitment to support the president.

“I will be with you, whatever,” he wrote.

The memo was seen by officials at 10 Downing Street but not by the foreign secretary or any other member of the cabinet.

This reflected Blair’s style of government, which tended to bypass cabinet and traditional decision-making processes.

Because intelligence chiefs were so eager to support their political masters, Chilcot concludes that Blair did not, in fact, “sex up” the notorious “dodgy dossier” about Iraq’s alleged WMD in September 2002.

Although the foreword to the dossier presented the intelligence estimate with a certainty that was not justified, Chilcot says the joint intelligence committee failed to make clear to Blair that the intelligence had not established beyond doubt that Iraq had continued to produce chemical and biological weapons, or was trying to develop nuclear weapons.

“It is now clear that policy on Iraq was made on the basis of flawed intelligence and assessments,” the reports says. “They were not challenged, and they should have been.”

But when it became clear in March that there was no chance of securing a majority for a second resolution, which would authorise military action, Blair and foreign secretary Jack Straw blamed France for blocking action at the UN.

“In the absence of a majority in support of military action, we consider that the UK was, in fact, undermining the security council’s authority,” Chilcot says.

Blair’s attorney general, Peter Goldsmith, at first advised that a second UN resolution was needed to offer a legal basis for invading Iraq.

But when it became clear that no second resolution was possible, Goldsmith issued fresh advice, saying that a “reasonable case” could be made that resolution 1441 was enough.

When the military and the civil service both asked for more clarity on the legality of force, Goldsmith strengthened his advice to say that the “better view” was that there was, on balance, a secure legal basis for military action without a further Security Council resolution.

“Mr Blair did so the next day. However, the precise basis on which Mr Blair made that decision is not clear,” Chilcot says.

The report does not express a view on whether military action was illegal, saying the issue can only be resolved by a “properly constituted and internationally recognised court”.

“We have, however, concluded that the circumstances in which it was decided that there was a legal basis for UK military action were far from satisfactory,” Chilcot says.

Once Blair decided to take part in the invasion of Iraq, defence chiefs were determined to deploy a substantial British military force to give them some influence over US decisions.

But the timescale for planning the deployment was too short to prepare properly or to adequately equip the troops.

To add to the difficulties faced by British forces, their invasion plan changed in January 2003, when Turkey’s refusal to allow its territory to be used meant they had to deploy in the south of Iraq rather than the north.

If the planning for the conflict itself was inadequate, plans for the post-conflict occupation were more woeful still. Chilcot is withering about Blair’s failure to anticipate the aftermath of the invasion.

“Mr Blair told the inquiry that the difficulties encountered in Iraq after the invasion could not have been known in advance.

“We do not agree that hindsight is required. The risks of internal strife in Iraq, active Iranian pursuit of its interests, regional instability, and Al Qaida activity in Iraq, were each explicitly identified before the invasion,” he says.

The lack of post-conflict planning was to have fatal consequences for British forces, which fought a successful campaign to capture Basra but were ill-equipped to deal with the insurgency that followed.

The troops in Iraq used Snatch Land Rovers, which had been redeployed from Northern Ireland.

But it was soon clear that the vehicles were designed to withstand low-velocity fire and shrapnel but not than roadside bombs, which were the greatest threat.

From 2006, British forces were engaged in long military campaigns in Iraq and Afghanistan, without an adequate supply of such resources as helicopters and equipment for surveillance and intelligence.

“It was humiliating that the UK reached a position in which an agreement with a militia group which had been actively targeting UK forces was considered the best option available.

“The UK military role in Iraq ended a very long way from success.”

Chilcot concludes by outlining some of the lessons to be drawn from the war, including the need to assess risks, weigh options, set a realistic strategy and ensure that the civilian and military arms of government are properly equipped.

“Above all, the lesson is that all aspects of any intervention need to be calculated, debated and challenged with the utmost rigour. And, when decisions have been made, they need to be implemented fully,” he says.

“Sadly, neither was the case in relation to the UK government’s actions in Iraq.”