Some Muslims feel sidelined in the debate about terror and freedom 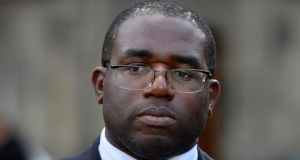 Labour Party MP David Lammy suggested some of the problems of disconnection within the British Muslim community are economic: “You don’t find many terrorists who have a mortgage and a good job,” he said. Photograph: Ben Stansall/AFP/Getty Images

A Bangladeshi mini-cab driver took Labour’s David Lammy to Heathrow recently for an early flight. Recognising the Tottenham MP, the man became upset, telling the story of his nephews who had quit north London to fight with Islamic State.

“They had left with two other nephews from Birmingham. They travelled to Spain, on to Turkey and then into Syria, ” Lammy told The Irish Times. “The man was ashamed; but angry, too, with the police for not doing enough to stop them.”

In the wake of Paris, British Muslims feel besieged, forced to condemn the attacks, yet equally concerned, annoyed or simply angered at the decision of British newspapers to publish Charlie Hebdo’s latest Muhammad cartoons.

“Muslims as a community have been vilified and demonised, turned into a hostile community,” complains Abed Choudhury of the Islamic Human Rights Commission. “Just look at the counter-terrorism legislation currently before Westminster.”

The legislation will subsume the Prevention of Terrorism Act and the Emergency Provisions Act that were targeted first at dealing with the IRA, but it adds new powers to the British state’s armoury that are questioned by critics.

For many people coping with the terrorism threat, but not just them, the home office’s plans are a sensible strategy to nip problems in the bud, say supporters; but for detractors it is a step too far.

Concerned about the legislation, the Islamic Human Rights Commission this week decided to abandon its long-standing policy of engaging with the British government about anti-terrorism laws, believing its voice is not being heeded.

“[We believe] that the state’s uncompromising drive to legislate away fundamental freedoms in order to tackle terrorism over the last 18 years has wilfully ignored objections raised by organisations like us,” it complained.

In Lammy’s eyes, some of the problems of disconnection within the Muslim community are economic: “You don’t find many terrorists who have a mortgage and a good job,” he tells The Irish Times.

Often they come from homes where fathers work in low-paid jobs, mothers speak poor English and are confined to their homes and the children become radicalised online in their bedrooms.

The publication by British media outlets of the latest Charlie Hebdo cartoons has inflamed the situation, with some extremist opinion online saying the Parisian attack on the magazine was justified.

Often, moderate non-Muslim opinion is prepared to accept some Muslim complaints about past Charlie Hebdo cartoons, but fails to understand criticism about the “Tout est pardonné” one, believing that it cannot be seen as offensive.

Such views find little favour among Muslims. In Bristol, the head of the Jamia Masjid mosque, Abdul Malik, said the latest images – bought by up to five million French – are “racist, derogatory, and hate-filled”.

In a letter to the Bristol Post, he wrote: “Easton Jamia Masjid was appalled by the events in Paris last week, and we stood, without hesitation, at the forefront of those first to unequivocally condemn the acts of such violent terrorism”.

Saying “there is no place for murderous vigilantism or terrorism in Islam”, Malik accepted that the principle of free speech permits the publication of caricatures of the Prophet Muhammad: “However, we challenge the wisdom in doing so. We challenge the rationale in doing so.”

In Rotherham in South Yorkshire, Muhbeen Hussain told The Irish Times: “Nobody is saying that you cannot debate anything that you want about Islam, but what is the need to insult people? All it does is increase tension.”